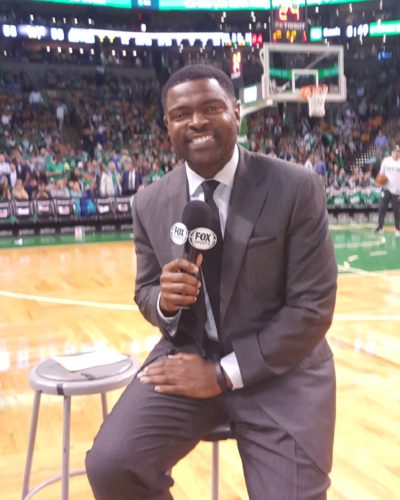 Telly Hughes always carried himself with class and dignity as one of Wisconsin’s more recognizable sports broadcasters.

And that’s precisely how Hughes has conducted himself since learning he had been relieved of his duties by the Milwaukee Bucks, whom he covered for almost a decade.

While acknowledging the Bucks’ decision was difficult to accept, he had nothing but good things to say about the organization.

“They just told me they want to go in a different direction’’ Hughes said in a phone interview. “I respect their decision. They feel as though this is something that had to be done. They feel it’s going to improve the product.

“I completely understand and respect that. I appreciate the opportunities I’ve had over the last eight seasons.’’

The affable 40-year-old Hughes had covered the Bucks and Milwaukee Brewers for Fox Sports Wisconsin since 2010 after coming to Milwaukee from Minneapolis. He covered the Brewers six years and the Bucks eight years, the last two as the Bucks’ director of digital content. As a broadcaster, Hughes exhibited an easy-going, laid-back demeanor and established a strong rapport with players and coaches.

During his first six seasons in Milwaukee, Hughes pulled double duty, working approximately 120 Brewers games and 75 Bucks games a year. He conceded the heavy workload was a grind and it became a daunting challenge for his family, which includes his wife, Toya, and two daughters: Tannar, who is 11, and Tahlia, who is 8.

“It was difficult being away from them,’’ Hughes said. “I wanted to spend more time with them.’’

He got that chance when the Bucks hired him two years ago and discontinued doing Brewers games. While he roamed the sidelines, providing television viewers updates and insight, he also made sure to find time to acknowledge his biggest fan, his mother Annie Hughes who religiously watched his television work.

“My mom passed before last season started but she had the opportunity of seeing seven seasons of her son being a part of major league sports,’’ said Hughes, one of five siblings raised in a single-parent home in East St. Louis, Ill. “Having been able to do that is one of the most cherished things in my life.

“My mother was, by far, my best friend. After every pre-game, I’d be in the tunnel on the phone talking to her. She’d watch from East St. Louis; she had the Fox package. It was extremely tough not having her around.’’

It’ll undoubtedly be tough on Bucks’ fans around the state who have watched him continually grow as a broadcaster. Last season, some fans even heard him as a radio broadcaster. Hughes did five games as the play-by-play voice of the Wisconsin Herd, the Bucks’ G League affiliate in Oshkosh, that were carried on the radio, Facebook and local television.

“I enjoyed that; I’d like to do that more,’’ Hughes said of doing play-by-play.

While Hughes is now job hunting, he is doing it in an upbeat and optimistic manner. He’s ready to move on with his life although, on those occasions when he does look back on his lengthy career in Milwaukee, it is with fondness.

“I have no ill will at all,’’ said Hughes, who won an Emmy in 2008 for “Our Heroes: A Black History Month Special’’. “I am so thankful and appreciative of the opportunities I had in Milwaukee. I’m a kid from East St. Louis and I never thought I’d get an opportunity to be a part of the NBA.

“Milwaukee, from day one, has been so receptive and welcoming to me and my family. I’m really grateful how the people in Milwaukee and Wisconsin really embraced me. It was a good run, a really good run. But I’m equally excited about the next chapter in my life.’’