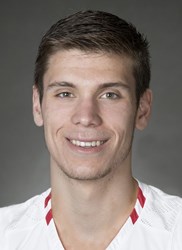 There were some surprised people when it was learned that Ethan Happ hadn’t been extended an invitation to the upcoming NBA Combine in Chicago.

After all, Happ is regarded as a legitimate pro prospect.

But Happ, who has declared his intentions to test the NBA draft waters, hasn’t hired an agent, leaving the door open for him to return to the University of Wisconsin for his senior season.

And that’s precisely what many NBA officials believe will occur: that the 6-foot-10 Happ will eventually withdraw his name for the draft and remain a Badger.

“The word is he (Happ) is going back to school and only using this to get an evaluation of his game from us,’’ a veteran NBA college scout said explaining why Happ wasn’t chosen to partake in the NBA Combine, which is May 16-20.

“And another reason he wasn’t chosen is that we’ve all seen him play a lot at Wisconsin. We know his game; we know what he’s about. A bunch of guys going to Chicago, we don’t know nearly as much about.’’

Another player who wasn’t invited to the NBA Combine is Matur Maker, the younger brother of Bucks center Thon Maker. Unlike Happ, Maker has every intention of staying in the draft.

The 6-foot-10 Maker, who played prep ball in recent years in Ontario, Canada, is working out with Thon in California and has hired an agent, Mike George.

While Maker was shunned for the Combine, NBA officials are familiar with him and hi game as well. In fact, he already has pre-draft workouts scheduled for nearly a dozen teams, one being the Bucks.

The 6-10 Antetokounmpo, who was a prep standout at Whitefish Bay (Wis.) Dominican, averaged 5.2 points and 2.9 rebounds in 29 games as a red-shirt freshman for Dayton last season.