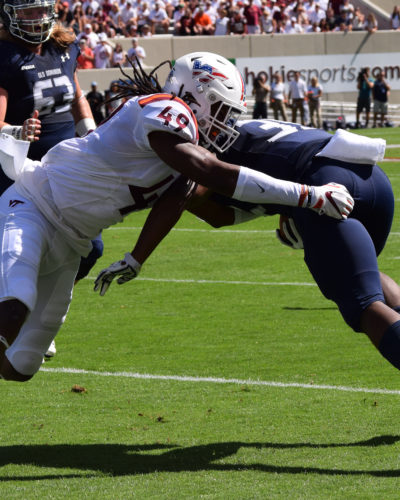 It’s virtually a given the Green Bay Packers will secure an outstanding player by staying pat in Thursday night’s NFL draft.

However, they could snare an exceptional one by moving up from their current 14th spot.

The Packers have several glaring needs, most notably on defense. They need help in the secondary, at both the cornerback and safety positions, and they desperately need an outside linebacker who can be the playmaker Clay Matthews once was.

Offensively, the Packers are generally in good shape, with their primary draft needs being at right tackle and right guard.

So, what should the Packers do with their all-important first-round pick, a pick that should, at least theoretically, net them an instant starter and perhaps a difference-maker?

If I was Brian Gutekunst, the Packers general manager, I would package some of my extra picks and move up a few spots – ideally in the top 10. I would especially go that route if Virginia Tech’s Tremaine Edmunds is still on the board.

Edmunds is widely regarded as the best outside linebacker in the draft – and for good reasons. At 6-foot-5, 243 pounds, Edmunds is a physical freak. He runs the 40 in 4.54 and is strong. Most importantly, he’s productive. He recorded 109 tackles, 5.5 sacks and three forced fumbles last season.

“He is a special player,’’ an AFC executive told me last week about Edmunds. “I think he’s one of the top six players in the draft, but he’s probably going to slip because of all the quarterbacks.’’

Previous: Who will be the Packers’ first pick? State media give their choices
Next: Bucks head to Beantown with confidence