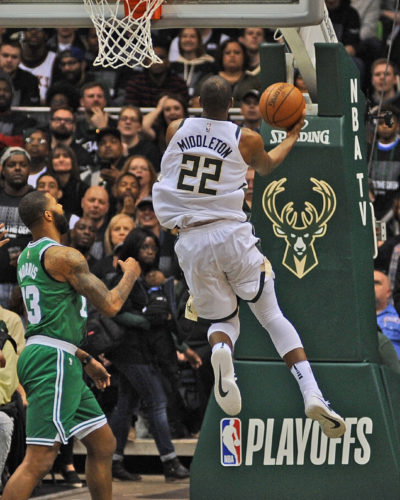 MILWAUKEE – And now it’s down to one game.

After playing six, hard-fought games, with the Milwaukee Bucks winning three of them and the Boston Celtics winning the other three, the seventh and decisive game in this Eastern Conference opening-round series will be settled on Saturday in Beantown.

The Bucks, winners in three of the last four games, exuded confidence after their convincing 97-86 victory on Thursday night at the BMO Harris Bradley Center.

“It was big,’’ Giannis Antetokounmpo said of the Bucks’ triumph. “We’ve grown as a team. We were in the same position last year (against Toronto), but we weren’t able to make Game 6.

“We have a big opportunity ahead of us. Hopefully, we can get Boston in Game 7.’’

The Bucks seemingly have found a good rhythm. Their marque players are playing well. Khris Middleton is enjoying a sensational series, Giannis Antetokounmpo is playing like the All-Star he is, recording a double-double with 31 points and 14 rebounds in Game 6, and Jabari Parker, who inexcusably played a mere 15 minutes in Game 1 and then a paltry 10 minutes in Game 2, continues to be a big-time contributor not only with his scoring but some quality defense. He grabbed 11 rebounds – to go along with nine points – in 26 minutes off the bench in Game 6.

The Bucks have beautifully implemented assistant coach Sean Sweeney’s defensive game-plans and have packed the lane while taking their chances on the Cs consistently connecting from outside. If the Cs had the services of injured stars Gordon Hayward and Kyrie Irving, two potent long-range shooters, the Celtics probably would have wrapped this series.

But they don’t have Hayward and Irving, so rest assured, expect the Bucks to deploy the same defensive strategy in Game 7.

Said Boston forward Jayson Tatum: “Sometimes the ball doesn’t go in. I feel like we made the right plays on a number of different occasions, kicking it out to create good looks. They didn’t go down today but, hopefully, they do on Saturday.’’

One of the key factors in the Bucks’ being able to deadline the series in Game 6 was the solid play of their bench.

Bucks coach Joe Prunty tightened his rotations and went with four guys off the bench: Parker, Matthew Dellavedova, Tyler Zeller and Tony Snell. Parker was stellar and Snell, who struggled mightily in the first six games (He entered Game 6 shooting a woeful 29 percent from the field and didn’t get to the line even once), was a plus-13. Only Antetokounmpo, with a plus-17, was better.

Parker was plus-11, while Dellavedova was plus-4. Zeller recorded a 0 plus-minus.

The Cetics have one rookie – Tatum—and one second-year player—Jaylen Brown – in their starting lineup.  The only Cs starter with extensive playoff experience is Al Horford.

Horford conceded Game 7 will be a tough test for his young teammates.

“I think this is going to be new for our group,’’ Horford said. “This whole playoff experience has been new. We have a lot of new pieces and, even for some of the guys that were here (last year), it’s different.

In Game 5, Antetokounmpo was a non-factor as a scorer. Despite playing 41 minutes, he just took 10 shots and scored 16 points in the Bucks’ 92-87 setback.

In Game 6, Antetokoubmpo more than doubled his number of shots. He launched 23, hitting 13, en route to a 31-point outing.

“My team did a great job looking for me,’’ Antetokounmpo said. “I was trying to make plays and be aggressive and that’s what I did tonight.’’

Added Prunty: “I thought he played great. I don’t think he forced anything.’’

Middleton on Game 7: “It’s going to be crazy. It’s do or die at this point. The crowd in Boston is rowdy, just like they are here. It’s going to be a great game. There are no secrets between teams. It comes down to who has more will.’’