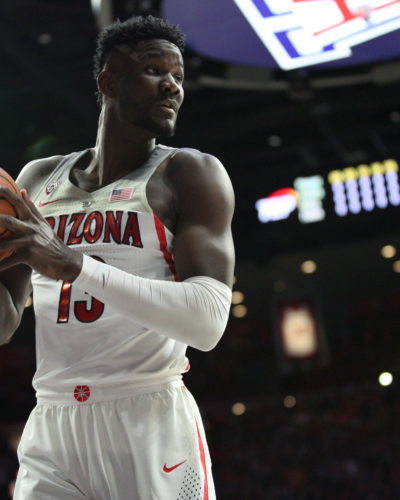 If you’re a fan of the Memphis Grizzlies or the Phoenix Suns and a handful of other lottery-bound teams, you probably can’t wait for the NBA draft on June 21.

As for the rest of the teams, especially those drafting in the latter third portion of the first round, well … there’s always the 2019 draft.

“This is a top-heavy draft,’’ an NBA scouting director said. “I think there’s five, six, maybe seven guys who could be really good. Then, it starts to drop off.’’

Added a veteran Western Conference scout: “I know there’s been a lot of hype about this draft but, to be honest with you, I don’t see it. I don’t think it’s a very good draft. It doesn’t have any transformative players. No LeBron. No Tim Duncan or whoever.

The two NBA officials, who were granted anonymity, agreed to reveal their top 10 prospects while giving capsule comments on each of them. Here are their selections:

“Ayton is the most dominant center in college basketball. Clearly, the No. 1 pick. Point blank. End of story.’’

“He’s really good; He’s got a good foundation to have a nice offensive skill-set. He’s got it defensively, and you can see he’s got a great NBA-ready body.’’

“I really like his versatility and I like how he does a little bit of everything that fours (power forwards) do. In my opinion, he’s got a chance to be a star.’’

“He’s Just a great talent. He can rebound, he can score … He does a lot of things pretty well.’’

“He’s probably the most versatile player in the draft. He can play one, two and three. He’s got great court vision. If you’re open, he’ll find you. He just needs to be more consistent and get stronger. He can play, no question about it.’’

“He’s doing very well in the second best league in the world. He really knows how pass and is just a good all-around player. The one thing that could limit his upside is his (lack of) athleticism, but that’s about it’’.

“He’s got to develop more of an offensive game, but from a defensive standpoint, he’s got a chance to make an impact right away. He’ll be a center in the NBA. I think he’s probably got the most upside of any player in the draft. It’s all about down the road with him. He may be the best pick in the draft in five years from now.’’

“He’s got a very interesting skill-set. He’s very long and he’s a very good defensive player. He can shoot the mid-range jumper and he’s not bad from 3-point range, but he still needs to develop his overall offensive game.’’

“He’s imposing with length; he’s got like a 7-9 wing span. So, he can affect a game from the defensive end. The biggest knock on him is: Does he love the game of basketball? With him, it’s not so much about talent, but his approach his game.’’

“He’s very long and he may hang his hat on being a shot-blocker and rebounder until his offensive game comes around. He doesn’t have much of a feel for the offensive part of the game. But he’s a very smart kid; he could have went to an Ivy League school if he wanted to.’’

“He’s probably the most gifted of all the guy s in the draft offensively. But he’s definitely got to get stronger and develop a defensive mind set. He doesn’t want to guard anybody.’’

“He’s very skilled. He can really shoot it, whether it’s off the dribble or catch and shoot. He’s got a sophisticated offensive game.’’

“He’s physically dominant and should be able to play the four and five spots.  He can score around the basket and, in time, will have ability to step out and make the mid-range jump shot. He’s pretty solid as a pick; you know what you’re going to get.’’

“He’s just a good, solid player. He’s more of your prototypical four. Great body, good athlete. He has a nice shooting release and he rebounds decently.’’

“Nobody has slipped more in the last month or so than him. A month or so ago, he was a top five pick. Now, he and Collin Sexton are right there together, like the sixth, seventh, eighth guys in the draft.  Having said that, he has a great feel for the game and I think players enjoy playing with him. There’s a confidence about him. And you got to like how he can shoot it with great range. The biggest knock on him is that he has no interest on the defensive end. He’s even worse (defensively) than Porter. He guards no one.’’

“Teams have obviously keyed on him and tried to shut him down and they still couldn’t. In terms of dribbling, passing and shooting, there’s not many, if any, better in the country.’’

“He’s got NBA quickness and speed in the open floor. But he’s at best a streaky shooter. He’s the showman of the draft. He likes to make that fancy pass. He carried that team (Alabama) and that says a lot about him and his abilities.’’

”I think he’s a huge NBA talent. He’s got speed and quickness and explosiveness. His shooting has to get better and he needs to work on his shot. It’s not broken, but it’s not great at all. And he’s not the classic point guard: His assist-to-turnover ratio isn’t very good. He can’t pass like Young and he’s not as creative, but he’s a better athlete than Young.’’

“He’s got a really nice release; he’ll be one of those guys who can spread the floor. But he’s going to struggle on defense, especially trying to defend guys out on the perimeter.’’

Scouting director’s rank: not in top 10

“I probably have him (ranked) higher than some people but I like his potential. He’s a hybrid, a three-four. He rebounds OK and his post-up game is OK, but he’s a really good athlete so I could see him playing the three spot because of his quickness and explosiveness.’’