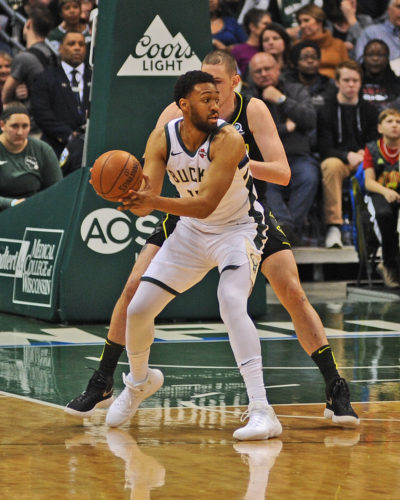 Home » Gery's Blog » Jabari Parker: a man on a mission

After their last game before the All-Star break last week, virtually all of the Milwaukee Bucks quickly headed to the airport to get away from the harsh Midwest weather.

Giannis Antetokounmpo, of course, headed to L.A. for the All-Star Game. Thon Maker also went to Tinseltown for All-Star weekend. John Henson flew home to Tampa, while Jason Terry went to his home in Dallas.

“I’m not going anywhere,’’ Parker said after the Bucks-Nuggets game last Thursday at the BMO Harris Bradley Center. “I’m staying around here. I got some work to do.’’

So, while the vast majority of his teammates and coaches went on mini-vacations, Parker went to the gym and worked on his game and conditioning. He wants to be at the top of his game down the stretch and help ensure a playoff spot for the Bucks..

Parker has played in just six games this season following anterior cruciate ligament surgery on his left knee. He has looked amazingly good, averaging 6.6 points and 3 rebounds in 17.7 minutes a game. He is soaring and playing at full bore, just like he did last season before the injury when he drew serious All-Star consideration by averaging 20.1 points, 6.2 rebounds and 2.3 assists.

“I’m not surprised Jabari hung around Milwaukee,’’ a Parker confidant said Monday. “Jabari is old school; he doesn’t take days off. Trust me, he’s on a mission right now.’’

PARKER HAS EMPATHY FOR PORZINGIS: Having twice suffered ACL tears, Parker can relate to what New York Knicks star forward Kristaps Porzingis is going through these days.

Parker watched from the Bucks bench when Porzingis suffered his season-ending knee injury on Feb. 6 at Madison Square Garden.

“But I know what he’s going through. It’s really tough. I wish him nothing but the best and, if he ever needs anything from me, I’ll be there for him.’’

Asked what advice he would offer Porzingis, who had been selected to the All-Star Game before getting hurt, Parker said: “Just train your body and, most importantly, train your mind because the spirit and soul are in charge of the vessel.’’

HARRIS HAPPY FOR KAMINSKY: There were some upset University of Wisconsin basketball fans when Frank Kaminsky recently had his Badgers’ No. 44 jersey hoisted to the rafters at the Kohl Center in Madison. Kaminsky became just the second player in Wisconsin history to be bestowed with the honor, joining the late Albert “Ab’’ Nichols (No. 8).

Some Badgers fans felt there were other players who should have been honored before Kaminsky, who was Wisconsin’s first consensus National Player of the Year.

But Devin Harris, who is now playing for the Denver Nuggets and one of the players many UW fans felt deserved the same honor, said he didn’t feel slighted and was delighted for Kaminsky, who now plays for the Charlotte Hornets.

“I think it’s a great honor for Frank,’’ Harris said of Kaminsky, whom he called a friend. “Being the first consensus National Player of the Year at Wisconsin and going to two Final Fours … it’s well-deserving. He had a heck of career.’’

Asked if he hoped more Wisconsin jerseys would be placed in the Kohl Center rafters, Harris said, “I hope so, but that’s up to Barry (Wisconsin AD Barry Alvarez). But right now, it’s all about Frank. I’m very happy for him.’’