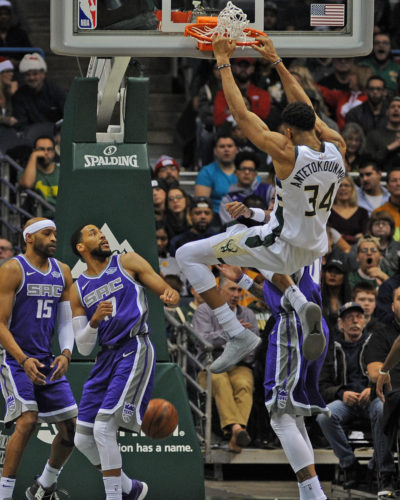 Giannis Antetokounmpo scored 25 points on his 23rd birthday last night leading the Bucks to a 104-100 win over the Detroit Pistons.

Antetokounmpo is one of only 14 NBA players with 300 or more career games played prior to turning 23. He also ranks tied for fourth on the list of most triple-doubles by a player prior to his 23rd birthday with eight. Magic Johnson had 19, followed by LeBron with 14, Giannis’ coach, Jason Kidd, with 11, and Alvan Adams also with eight.

It’s interesting to note that Giannis is one of only three NBA players to have scored 5,000 points, grabbed 2,000 rebounds and hand-out 1,000 assists before turning 23. The others: LeBron and Tracy McGrady. If we add steals and blocked shots to the above three stats, Giannis is one of only two players in history (the other is McGrady) to have 5,000 points, 2,000 rebounds, 1,000 assists, 300 steals and 300 blocked shots before turning 23.

Giannis is certainly making a case as one of the top players in the NBA, but based on his stats above, we can confidently say today, the day after his 23rd birthday, that he has been one of the greatest players in the league prior to blowing out 23 candles on his birthday cake. It’s not too far-fetched to say that no one other than LeBron has had an impact on the NBA prior to turning 23 like Giannis.

Previous: PACKERSTATS-McCarthy’s teams are almost unbeatable at Lambeau Field in December
Next: TODAY’S SPORTSTAT — Patriots get a kick out of playing in Gillett Stadium