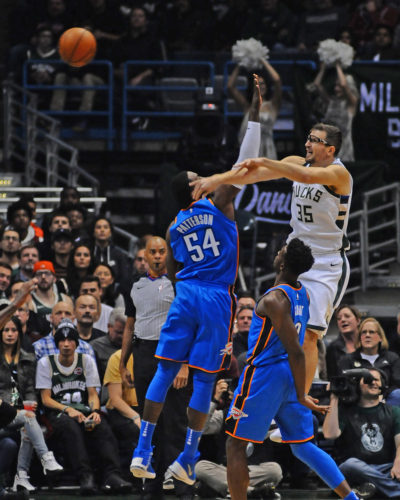 Since the Milwaukee Bucks dealt veteran center Greg Monroe to the Phoenix Suns, it’s no secret the team has explored ways to find an adequate replacement.

“They’re looking for a physical center,’’ said a front office executive. “They have (John) Henson and they got (Thon) Maker, but they don’t have that physical big.’’

The Bucks are probably going to be in the market to fill a need equally as important: a shooter – especially with Mirza Teletovic’s future up in the air. Teletovic is sidelined indefinitely with blood clots in both of his lungs.

“They (the Bucks) are a pretty good team,’’ said a veteran NBA advanced scout, who saw the Bucks up close and personal in recent weeks. “They can be really good on defense with their length, and they attack the basket pretty well on offense with Giannis (Antetokounmpo) and they have some good mid-range shooters like (Kris) Middleton and (Tony) Snell.

“They just don’t have outside shooters. I see that as their biggest weakness.’’

Do you remember the ill-fated trade with the Toronto in the summer of 2015 when the Bucks sent their second-round pick Norman Powell (who hurt them in last season’s playoffs) and a future first-round pick (who turned out to be OG Anunoby, now a starter for the Raps) for Greivis Vasquez (who played all of 23 games for the Bucks and is now out of the NBA) to the first-round selection of backup Rashad Vaughn (whom the Bucks chose not to pick up his option).

Hammond/Kidd’s search for a shooter also included the free-agent signing of Teletovic in the summer of 2016. Teletovic, who signed a three-year, $31.5 million contract, noticeably struggled in his first season with the Bucks. He averaged a paltry 6.4 points — well under the 12.2 points he averaged the season before in Phoenix.

And Teletovic, who was brought to Milwaukee to be a floor spacer, connected on a subpar 34 percent of his treys – again well below the 39 percent he shot the season before with the Suns.

But Teletovic seemed to get back on track this season. He made .467 of his 3-pointers through the first 10 games, the best on the team. It appeared the Bucks may have finally found the long-range shooter they coveted.

But then Teletovic underwent surgery to repair cartilage in his left knee before learning a short time later he would be sidelined indefinitely with pulmonary embolism in both lungs.

According to Bucks officials, he was to rest for 10 days, which was until Dec. 24, before having a supervised rehabilitation.

But two sources close to the Bucks claim Teletovic won’t be returning anytime soon. They believe the 6-foot-9 forward will be sidelined for at least three more months – or until late in the regular season. At that point, it could be difficult for Teletovic to be in game shape for the playoffs, if the highly erratic Bucks would make them.

Teletovic made a surprise visit to the Bucks’ locker room before their game against Charlotte last week. Well-liked by his teammates, they greeted him with handshakes, pats on the back and words of encouragement.

Teletovic, 32, conceded he is going through tough times and had little to say about his condition.

Asked if he expected to return this season, Teletovic paused before saying, “I don’t know. I’m not an expert in this.’’

Teletovic, who missed almost half of the 2014-2015 season with the Brooklyn Nets with multiple blood clots, then politely said he couldn’t discuss his situation anymore.