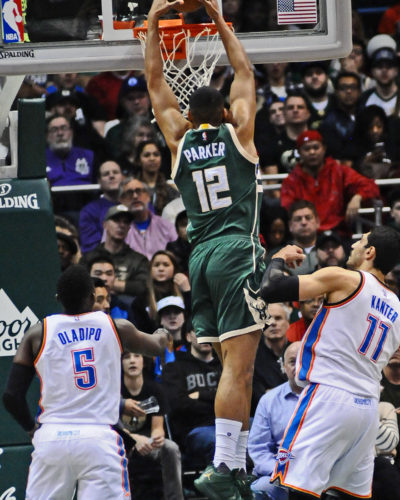 At the NBA All-Star break last February, Jabari Parker was unequivocally one of the NBA’s brightest young stars.

Just 21 years old then, the Milwaukee Bucks’ gifted forward posted All-Star numbers: 20.1 points, 6.2 rebounds, 2.8 assists while shooting a highly-respectable 49 percent from the field and 37 percent from beyond the arc.

If the Bucks had a better record at the time, most observers believe the 6-foot-8 Parker – the No. 2 overall pick in the 2014 NBA draft – would have joined his teammate Giannis Antetokounmpo at the All-Star Game in New Orleans.

But Parker’s stellar season was prematurely cut short at 51 games when he tore the left anterior cruciate ligament for the second time in his young career.

Since then Parker has been diligently rehabbing and, by all accounts, is on target to returning to action this season, quite possibly in February. Parker and the Bucks have publicly expressed confidence he’ll return to old form and be as good, or even better, than he was prior to the second injury setback.

Whether the Bucks truly believe that, as the driven Parker most certainly does, will be severely tested between now and October 16, which is the deadline for rookie scale contract extensions.

With salaries having skyrocketed over the summer, thanks in large measure to an extremely lucrative television contract, multiple sources claim Parker will be seeking a contract similar to the one he expected to receive prior to his latest injury – a max contract of five years for anywhere between $146 million (25 percent of the salary cap) to $175M (30 percent of the cap).

It will be perhaps the biggest assignment new Bucks general manager Jon Horst, who had been the team’s director of basketball operations before his shocking promotion to GM, will ever have deal with in his role.

It won’t be for Mark Bartelstein, Parker’s new agent. Bartelstein, who heads up Chicago-based Priority Sports and Entertainment, is a longtime agent and regarded as one of the premier agents in sports. His company represents nearly 50 current NBA players, including stars like Boston’s Gordon Hayward and Washington’s Bradley Beal.

Bartelstein, who has known of Parker since the latter was in grade school in Chicago, has a well-deserved reputation of getting his clients top dollar. He acknowledged negotiations with the Bucks concerning a potential Parker contract extension have commenced.

“We have had discussions; there has been dialogue,’’ Bartelstein said. “It’s been a positive dialogue. But that’s all I can say at this time.’’

If Parker would garner a max contract, he would eventually become the Bucks’ highest-paid player. Antetokounmpo, represented by Octagon’s Alex Saratsis, signed a four-year deal for $100M last September, much to the delight of the Bucks’ front office.

The “Greek Freak’’ could have instead signed a five-year deal that would have paid him $143M. Antetokounmpo’s/Saratsis’ decision to pass up another $43M startled many in the basketball community and prompted  another prominent agent to remark, “Someday he (Antetokounmpo) is going to wake up and say, ‘Why in the hell did I do that?’ ’’

By convincing Antetokounmpo to take less than the max deal, some NBA folks believed then Bucks GM John Hammond, who is now the Orlando Magic’s GM, was setting the table for the Parker’s contract negotiation. Hammond intimated as much after the Antetokounnpo deal was finalized.

“That (a max contract) was discussed, discussed internally and externally,’’ Hammond said then. “And the one thing we asked Giannis to do was take that into consideration as we move forward. Give us every opportunity.

“There’s going to be guys and guys who have done that, players who have given back some.Hopefully, we’re going to have other guys with the organization willing to do that. Those small pieces can turn into a bigger chunk at some point.’’

Parker and Bartelstein wouldn’t comment on specifics on a potential new deal, but those familiar with both individuals insist that Bartelstein/Parker won’t settle for anything less than a max contract.

If the Bucks and Bartelstein can’t reach a deal before the deadline, Parker would become a restricted free agent after this season. It would mean the Bucks could then match any offer presented to Parker and retain his services.

If a settlement isn’t reached at that point, Parker would become an unrestricted free agent in the summer of 2019 and would be eligible to sign with any team – without the Bucks receiving any compensation.

The clock is ticking.