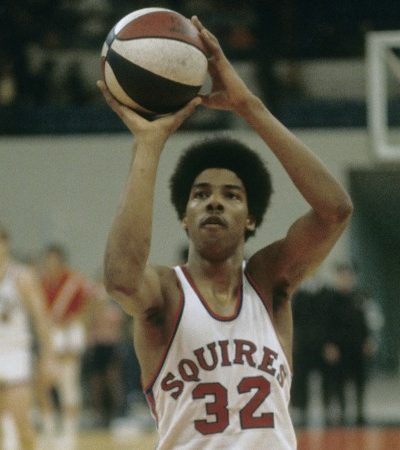 Now 80 years old and a consultant for the Toronto Raptors, Embry recalled how, when he was the general manager of the Milwaukee Bucks in the early ’70s, he lobbied the team’s hierarchy to draft an insanely athletic player from the East Coast.That was Julius Erving, aka Dr. J.

If not for some legal issues and some behind-the-scenes shenanigans, Erving would have joined the Bucks and, with Kareem Abdul-Jabbar and Oscar Robertson, formed perhaps the greatest triumvirate of players ever assembled.

Embry, who was a five-time All-Star, tells the story about first time he met Erving and how the Bucks were oh, so close to securing his services.

“I first saw Dr. J in 1968 when I played for the Celtics. I was asked to be a lecturer at a camp in upstate New York. I drove there on a Sunday night to lecture the next morning. I got there about 4 in the afternoon and the director asked me what I wanted to do. I said, I wanted to get some running in. So I ran in the mountains and then I came back for dinner.

“After dinner, he asked me what I wanted to do again and I said, “Give me a ball. I’d like to shoot.’ So I start shooting hook shots, jump shots and one of the coaches said he had someone who’d like to play one on one with me. I was thinking it was a college player but he said, ‘Nah. This kid is going to graduate from high school next year.’ I said, ‘I don’t want to play against a kid because I’m pretty physical.’ (The 6-foot-8 Embry weighed 240 pounds).

“He said you’ll be all right. So, I said OK. I told the kid, ‘Look son, I’m a pretty physical player.’ And he said, ‘I don’t care how you play. You can play any way you want. I’m not intimidated; I don’t care.’ So, we decided to play a game of seven and he jumps out 3-zip. I’m just shooting jump shots and he’s playing normal basketball, actually a little better than that.

“I then said to myself, ‘Hey, you don’t like to lose. You better adjust here because you are just going to shoot outside shots.’ I told him maybe I’ll go inside more on you now but I won’t hurt you.’ He said, ‘Mister, you can play any way you want.’ So we played and I think he still won 7-5 or something like that

“After we were d one, I said, ‘You’re pretty good son.’ And he said, ‘Well, I’m in high school.’ And I said, ‘Wow.’ Then the coaches said Wayne, he’s one of the best players in New York City. I said, ‘What’s your name?’ And he said Julius. That was the first encounter I had with who we now know as Dr. J.

“Now fast forward, in 1972, I’m the general manager of the Bucks and we had two draft picks that year. So I told ownership that I was going to draft – I forget the player we drafted (Russell Lee of Marshall with the sixth overall selection) — but, with the second pick in the first round, I said I would like to draft Julius Erving. I told them he’s playing in the ABA  (with the Virginia Squires) and he’s going to be a great player.

“They didn’t know who he was. They had never heard of him. They said, ‘Are you sure want to waste a draft pick on him?’ And, again, I told him he is playing in the ABA; that’s when the ABA just started out, and that I think we just ought to take a chance and draft him because we don’t know if the ABA is going to last.

“Well. we did draft him. As we now know the ABA did eventually fold and, when the ABA folded, the Atlanta Hawks signed him. They didn’t have the rights to him, but they assumed they did. The League upheld our rights and we got a second-round pick and cash from the Hawks for signing him. So, that’s satisfied that.

“But when ABA folded, he eventually became a free agent, even though we held the rights to him. But it didn’t matter at that time because it was part of the settlement. I still wanted to sign him, though. I knew his agent Irwin Weiner, and I went to New York to talk about signing Doc with Irwin.

“I had an appointment and was sitting in his office, all ready to go. But his assistant says to me that I had to wait a little bit longer. And so I said how much longer. Well, he said, he’s still in a meeting now and I don’t know how long that meeting is going to last.

“From what I understand, the reason why he didn’t want to come to Milwaukee was because he didn’t want to be the third wheel behind Oscar (Robertson) and Abdul-Jabbar. That’s what he said later on. He wanted to be his own man and have his own team. We also had (Bob) Dandridge on our team and he was a very good player, too. (a five-time All-Star).

“The next year (in 1974) we were in the Finals. Boston beat us in the seventh game in Milwaukee. But, of course, if we would have had Dr. J, I don’t think that would have happened.