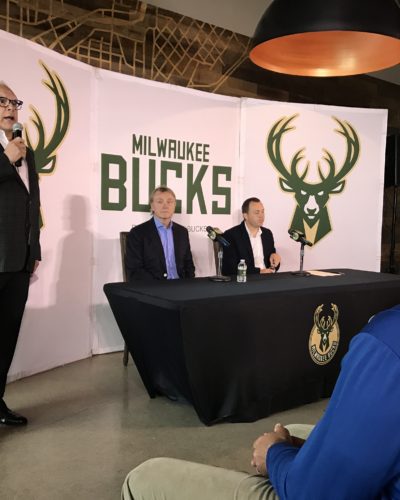 If you have never heard of Jon Horst, don’t feel badly.
Even many of his peers in the NBA are unfamiliar with Horst, the Milwaukee Bucks newly-hired general manager.
Two NBA front office executives whom I spoke with on the phone on Monday acknowledged they had never met or talked with the 34-year-old Horst, who had been the Bucks basketball operations director for the nine years after having worked three years with Detroit Pistons.
“Who is he?’’ a general manager asked me. “What did he do for them?’’
Added another general manager: “I wouldn’t know him if he walked into a room. I have no idea who he is.’’
That’s going to change quickly. Horst, who had been on the periphery of Bucks’ decisions in the past, will now be front and center stage.
Horst will be heavily involved in the team’s biggest decisions, starting with veteran center Greg Monroe’s decision whether to opt in or opt out of his contract on Wednesday, the NBA draft on Thursday night and then free agency in July.
While Horst has maintained a low profile as a Bucks employee, he isn’t short on confidence. That was demonstrated at Monday’s press conference to introduce him as the successor to John Hammond, who took a similar position in Orlando. Among Horst’s comments were: “We’re going to get No. 17 right and we’re going to get No. 48 right,’’ and “I’m a basketball expert,’’ and “I promise you the best is yet to come.’’

Talking a good game
While the Bucks brass profusely praised Hammond for his work with the organization after his departure to Orlando, many NBA observers took that with a grain of salt and felt Hammond never truly fit in with the team’s fast-talking, brash majority owners from New York: Wes Edens, Jamie Dinan and Marc Lasry.
Edens candidly conceded Hammond, who got an incredible five-year deal from the Magic despite the fact his Bucks had only two winning seasons in his nine-year tenure, wasn’t going to be part of the team’s long-range plans.
“We weren’t looking forward to John leaving us,’’ Edens said at the press conference. “At the same time, we weren’t as willing to make him a long-term offer of what’s he was looking for.’’

Bizarre process
The Bucks brass had sit-down, face-to-face interviews with nearly a dozen GM candidates, and interviewed the three finalists – then Bucks assistant GM Justin Zanik, former Atlanta Hawks GM Wes Wilcox and then Denver assistant GM Arturas Karnisovas – on two occasions.
And Horst?
“Interviewing for the job, it was just a conversation with Wes and Marc, a long extended conversation,’’ Horst said. “I know these guys. I’ve spent a lot of time with them the last few years.’’

Process this
Edens, taking an unsolicited shot the Philadelphia 76ers, who are in a rebuild mode they’ve tabbed “The Process.’’
Said Edens: “The guys in Philly like to talk about the process an awful lot, me, I’d rather talk about the results. I feel real good about the results on this (search for a GM). The process may look like it’s little bit sloppy but, at the end of the day, the result are what matters. We got the right guy (Horst) for the job.’’

Thanks, but no thanks
One of the players the Bucks have more than a passing interest in the draft is Terrance Ferguson, a 6-foot-7 shooting guard.
Ferguson, who opted to forego college and play in Australia last season, is a project but could possibly be the best shooter available when the Bucks make their first-round selection.
However, Ferguson, who could go anywhere from 12 to 22, canceled his appointment with the Bucks on Monday. Three other players who the Bucks had hopes to work out – Duke center Harry Giles, Creighton center Justin Patton and Duke shooting guard Luke Kennard – also declined invites from the Bucks.
The Bucks have rarely selected a player who didn’t work out for them in Milwaukee.

Going back home
While there are precious few front office jobs available, some NBA officials believe Zanik will eventually end up in Utah, where he worked for the Jazz before joining the Bucks last year.

Previous: Kareem, Big O and Dr. J on the same team? It almost happened
Next: Tapp-ing into the Numbers: Can Aaron Judge become third rookie to win ROY and MVP in same season?