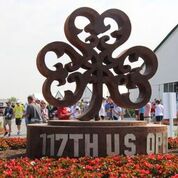 Some thoughts and observations about this week’s U.S. Open in lovely Erin, Wisconsin:

The first thing that stands out to me about Erin Hills is its enormity. It is huge. Make that HUGE. Just walking the monstrous four par 5s on the par-72 course that plays roughly 7,741 yards is a workout by itself.

The second thing that stands out to me is that, despite its natural layout in a peaceful countryside, it’s a rather bland course. Yes, bland. When I queried a spectator the other day about his feelings about Erin Hills, he summed it perfectly. “It’s a rolling course of nothingness,’’ he said, shrugging his shoulders.

Indeed, from an aesthetics standout, Erin Hills is a pretty but hardly stunning course. It pales considerably in comparison to many of the great scenic courses in America, including nearby Whistling Straits.

When I left Whistling Straits after the 2004 PGA Championship, I was blown away by its breathtaking beauty. I still am. When I left Erin Hills on Monday, instead of having similar sentiments, I had those of that spectator.

The groundskeepers are going to have their hands full this week dealing with the stifling temps. The greens are already noticeably dry in spots, despite being constantly watered. I can only imagine what Erin Hill’s water bill will be after this event.

Of the golfers I observed checking out the course during practice rounds, nobody caught my attention more than Rory McIlroy. Among a cast of confident of confident men, McIlroy is one, ultra-confident young man. I’ve been around countless pro athletes and McIlroy’s swagger ranks right up there with the best of them.

The fescue is insane. Any golfer who is going to try and be a hero and hit a big shot out of it is going to pay the price.

If you plan on taking in this event, it’s highly, highly, highly recommended you bring a visor, plenty of sun screen and a water bottle. There is precious little shade anywhere on this “rolling course of nothingness.’’

Be sure to also bring your credit card. There are countless ways to spend money, with the food and beverage prices amazingly reasonable, especially for a major sporting event. Even the prices in an extensive gift shop that offers virtually anything you want aren’t out of line.

If you decide to pass on the inevitable heat and inevitable long lines, watching it on TV wouldn’t be a bad alternative. The coverage figures be exceptional as a member of the Fox television crew told me the network will be using approximately 110 cameras.

Former pro and current NBC analyst Johnny Miller doesn’t think the U.S. Open will be coming back to Erin Hills.

Miller, the 1973 U.S. Open champ, told the Chicago Tribune: “I don’t think you’ll see (a U.S. Open at) Erin Hills again. It was really windy when I was there. It’s tough, really long. It’s a nice course  but really hard.’’

Did you notice Miller said “nice course’’? Anyway,whether Erin Hills hosts another U.S. Open is open to debate. What isn’t debatable is that it won’t be anytime soon. Sites for the next nine U.S. Opens have already been determined, starting next year at Shinnecock Hills Golf Club in Southampton, N.Y.

Prediction time: There hasn’t been a repeat U.S. Open champion since Curtis Strange won at The Country Club in Brookline, Mass., in 1988 and at Oak Hill Country Club in Rochester, N.Y. in 1989.

But I like Dustin Johnson’s chances of defending his title. Erin Hills is tailor-made for the big boppers and the 32-year-old Johnson is one, big bopper.

Previous: Adebayo brings a lot to the table
Next: Bucks eye shooters in the draft