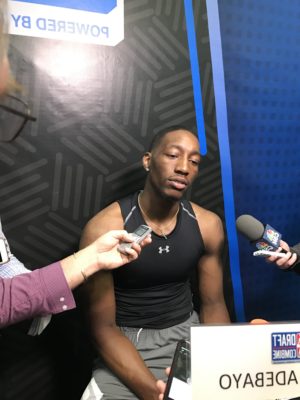 Home » Gery's Blog » Adebayo brings a lot to the table

All you have to do is check out the teams he has either worked out with already, or the team he’ll be auditioning with before the June 22 draft.

The talented 6-10, 243-pound power forward-center from the University of Kentucky has had auditions with Detroit (12th pick), Miami (14), Portland (15), Chicago (16) and Indiana (18). Adebayo will be working out for Milwaukee (No. 17) on Wednesday and has upcoming workouts scheduled with Charlotte (11) and Denver (13).

So, by the time the draft rolls around, Adebayo will have met with all eight team picking between 11 and 18. The only other team that has worked out Adebayo is New York, which has the eighth overall selection.

Adebayo is coming off a stellar freshman season for the Wildcats, averaging 13 points and 8 rebounds. Combine that with the fact he’s only 19, has a 38 1/2-inch vertical leap, a 7-3 wingspan and was the third-fastest big man in the shuttle run at the Chicago pre-draft camp and you can see why he is such an appealing prospect.

Adebayo is projected to be one of five quality big men selected in the middle of the first round. The others are Texas’ Jarrett Allen, who worked out for the Bucks on Tuesday, Duke’s Harry Giles, Creighton’s Justin Patterson and UCLA’s Ike Anigbogu.

Previous: Bucks center their attention on big men
Next: Erin Hills is, well, a ‘nice course’