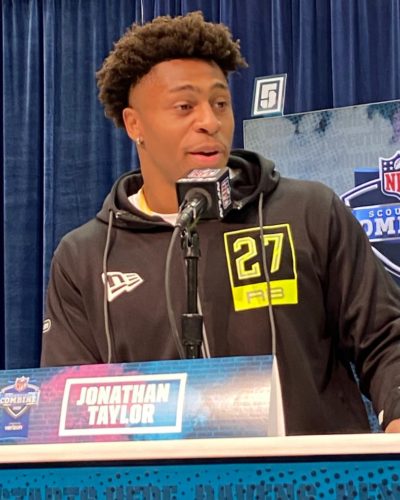 When Jonathan Taylor accepted a scholarship to play football at the University of Wisconsin, it didn’t take him long to pick out his jersey number.

Taylor selected No. 23 as a tribute to the running back he emulated as a young man in Salem, N.J.

“Growing up, my favorite running back was Arian Foster, hence the reason why I got 23,’’ Taylor said of the former four-time Pro Bowl running back with the Kansas City Chiefs. “I just thought he (Foster) was so smooth in and out of his cuts for his size.

“That’s the guy I modeled my game after.’’

Taylor certainly looked like a Foster clone during his three dominant seasons at Wisconsin. The 5-foot-10, 226-pound Taylor amassed 6,174 rushing yards, a total surpassed by only five others in NCAA Division I history. He was twice the recipient of the prestigious Doak Walker Award.

Taylor racked up his gaudy numbers in the same fashion Foster did while playing for the Chiefs, using a potent combination of brute strength and, yes, elite speed. Some NFL scouts had doubts concerning Taylor’s speed but he emphatically dispelled them by running a blistering 4.39 in the 40-yard dash. That was best time of anyone at his position and the seventh fastest of any player at the event.

But there’s another element to Taylor’s game besides speed and strength, an often overlooked but essential element that the game’s upper echelon runners possess.

“He has great vision,’’ said Barry Gardner, Taylor’s agent and president of BeGreat Sports, who played eight seasons in the NFL as a linebacker and special teams performer. “I see the comparisons between them (Taylor and Foster), but he also reminds me a little bit of Ahman Green, a little bit of Priest Holmes. Those guys had great vision. Jonathan has that same kind of vision and the explosion like them.’’

Green, who played eight of his 12 pro seasons with the Green Bay Packers, totaled 9,205 yards and ranks 38th in NFL history.

Holmes, who played 11 seasons in the NFL with Kansas City and Baltimore, finished his career with 8,172 yards, the 46th most in NFL history.

When asked at the Combine about his vision as a runner, Taylor said it was simply a byproduct of game preparation.

“Vision is just understanding the schemes,’’ said Taylor, a philosophy major at Wisconsin who rejected offers to attend and play football for some Ivy League schools. “If we’re running an outside zone to the left and you see the ‘backers (shifting0, you have a good idea that if you press the line of scrimmage long enough, you’ll be able to get that backside cut.

“So, a little bit of that is knowing the scheme.’’

What Taylor doesn’t know is where he’ll be selected in the upcoming draft, which commences on April 23. Taylor is one of the biggest wild-cards of the draft. The vast majority of the NFL’s 32 teams have conducted formal interviews with him. One of the teams that didn’t formally interview him was Green Bay, which seems set at the position with Aaron Jones and Jamaal Williams.

According to some NFL scouts, Taylor’s projected draft range is anywhere from the middle of the first round to early in the second. Two teams have prominently been linked to Taylor: Miami, which has the18th and 21st picks in the first round, and Kansas City, the reigning Super Bowl champion which has the 32nd pick.

“I would imagine Taylor will probably go between 21 and 30,’’ said an NFL scout with more than 25 years of drafting experience. “I have him rated higher, in the upper half of the first round.

“He’s the best back in the draft. He’s got great vision, great cut-back ability. He can turn a two-yard loss into a nice gain. He’s durable, he’s reliable; he’s there for you every game.

“I like a lot of things Taylor does, but what I really like is he’s super productive and he’ll be exactly the same in the NFL because of his talent and his intangibles.’’

Previous: The quest for being a .300 career hitter is daunting
Next: Who was the best one-and-one player in Bucks’ history?