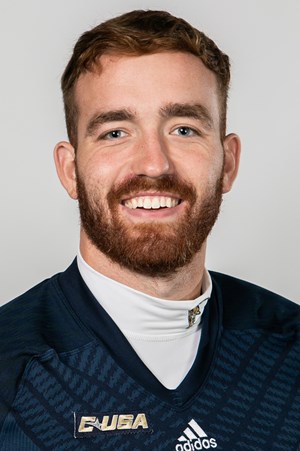 If you’re looking for a so-called “sleeper’’ in this year’s NFL draft, you need to look no farther than James Morgan.

After a nice but hardly spectacular collegiate career – first at Bowling Green and then at Florida International University, Morgan has piqued the interest of most NFL teams. He has gone from a projected undrafted prospect to one that could easily be taken on the second day of the draft, which commences next Thursday.

Morgan first opened the eyes of NFL officials with a stellar performance at the East-West Shrine Bowl. Then, he garnered additional interest with a strong showing at the NFL Combine in Indianapolis.

Morgan, who is 6-foot-4 and weighs 229 pounds, has impressed NFL officials with his arm strength –some scouts believe he has one of the strongest arms among this year’s draft eligible quarterbacks –toughness and perhaps most importantly his intelligence.

Some scouts said Morgan, who graduated from Bowling Green with a degree in pre-law, possesses a knack for easily picking up new systems and making shrewd in-games decisions.

While NFL officials fully realize making the transition from FIU to the NFL won’t be easy for Morgan, they are intrigued with his potential and believe he is a fascinating long-term project who is worth investing a valuable draft pick.

“He’s a good kid with a really good arm,’’ said a longtime NFL scout. “He’s got a cannon. He can make the throws.

“One of the knocks on him is that he’s been a little erratic, a little inconsistent and competition he played against. But he’s a guy you could develop into a nice NFL quarterback.’’

An AFC official said his team recently conducted a virtual interview with Morgan and came away impressed. He also said that more than a dozen other teams had conducted virtual interviews with him as well, including the Green Bay Packers, New Orleans Saints and Tampa Bay Buccaneers.

Interestingly, those three teams have veteran quarterbacks — Aaron Rodgers in Green Bay, Drew Brees in New Orleans and Tom Brady in Tampa Bay – which would allow them to slowly groom Morgan.

Morgan is certainly familiar with the Packers, who have done extensive work on several quarterbacks during the draft process. Morgan was born in Green Bay, attended Ashwaubenon High School, just outside of Green Bay and, as one might suspect, has been a Packers fan.

Through grade school, Morgan’s football jersey number was 4 because of Brett Favre. Then, in high school, after Favre had departed for the New York Jets, Morgan switched to 12 because of Rodgers. Morgan has worn 12 ever since.

Concluded another scout on Morgan: “He’s one of those post-season risers. A couple of months ago, I didn’t think he was even going to be drafted. Now everyone is talking about him; there’s a buzz about him. He could go in the fourth, maybe even in the third round now.’’