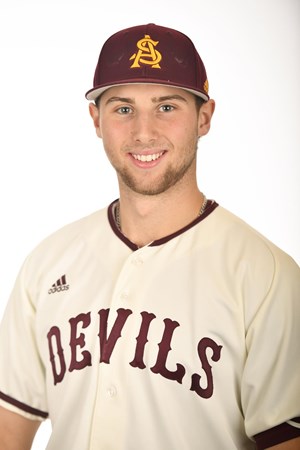 The state of Wisconsin has produced a first-round pick in the MLB draft each of the last three years.

There isn’t an elite prospect with Wisconsin ties in this year’s draft class. Arizona State right-handed pitcher Alec Marsh is the only lock to be a top-10 round pick and should hear his name called early on Day 2. Although a few other prospects are in the mix to go in the first 10 rounds, most likely will be Day 3 picks, coming off the board between rounds 11-40.

Here is a look at the top prep and college players with Wisconsin ties in this year’s draft:

Alec Marsh, RHP, Arizona State: Marsh (above photo) has been Arizona State’s top starting pitcher this spring. The Milwaukee native made major strides throughout his three seasons of college baseball.

His low-90s fastball and slider are his two best pitches. His curveball is an average offering while his changeup is a developing pitch. He does display some feel for the pitch, though.

Marsh likely will be a top-five round pick and has No. 4 or 5 starter potential in the pro ranks.

Zach Biermann, 1B/DH, Coastal Carolina: Biermann spent his first two years of college baseball at Polk State College, a junior college in Florida. The West Bend native has produced in each of his two years at Coastal Carolina. The senior left-handed hitter has a .309 average with 17 home runs and 76 RBIs in 249 at-bats. He’s struck out 65 times and drawn 28 walks this season.

Biermann has a knack for hitting but is a below-average defensive first baseman. After going undrafted as a junior last year, he will have little leverage with pro teams as a senior. He could be a top-10 round guy, especially since he won’t command a high signing bonus figure.

Ty Weber, RHP, Illinois: After the Cincinnati Reds selected Weber from Menomonee Falls High in the 34th round of the 2016 draft, he has worked as a starting pitcher in each of his three years at the University of Illinois. He’s been one of Illinois’ best pitchers this spring, posting a 2.97 ERA with 45 strikeouts and 31 walks allowed in 75 2/3 innings.

The 6-4, 215-pound righty throws a mid-90s fastball, curveball, slider and changeup. He’s done a solid job at the college level, but his inability to generate swings and misses will be a concern in pro ball.

Trevor Schwecke, SS, Milwaukee: The 6-1, 185-pound Marshfield native has produced in his three seasons at Milwaukee, hitting over .300 in every season. The right-handed hitter posted a .338 average with four home runs and 52 RBIs in 216 at-bats this spring. His slugging percentage rose from .419 as a sophomore to .514 as a junior this season.

He’s one of the top prospects in the Horizon League. He has strong instincts but profiles better at second base.

Nate Brown, RHP, Arizona: Brown would’ve been a top-10 round selection out of Arrowhead High in 2016 if it wasn’t for his strong commitment to the University of Florida. He pitched one season at Florida in 2017, posting a 4.74 ERA in 10 appearances, before transferring to Madison College last year.

He experienced mixed results at the junior college level. He also has struggled with his consistency this spring, recording a 9.00 ERA with 18 strikeouts and 19 walks allowed in 20 innings as a reliever.

The 6-1, 202-pound right-hander throws a low-to-mid-90s fastball, curveball, slider and changeup. His lack of consistency likely will force him to return to Arizona for his senior season.

Connor Prielipp, LHP, Tomah HS: The 6-2, 165-pound left-handed pitcher has been nearly unhittable this spring. He throws a low-90s fastball, curveball, slider and changeup. His curveball has elite spin rate. It was recorded at 3,100 rotations per minute at the Area Code Baseball Games last summer in California. The major-league average is 2,400 to 2,800 RPM.

The University of Alabama commit could be the highest pick in this year’s draft with Wisconsin ties if he doesn’t have signability concerns.

Jack Washburn, RHP, Webster HS: Washburn a 6-2, 208, hurler, throws a low-90s fastball, curveball, slider and changeup. He could sneak into the first 10 rounds of the draft, but his commitment to Oregon State likely will prevent that.

Nathan Stevens, C, Waunakee HS: Stevens has the potential to be a well-rounded catcher in the future. He is a 6-0, 197-pound catcher that bats from the left side of the plate. He has power potential and room to add strength to his frame. He’s strong defensively, possessing above-average arm strength and solid blocking skills and footwork. He’s an Arkansas commit.

Jack Krumbach, OF, Madison Memorial HS: Krumbach is a toolsy outfielder with above-average speed. He puts pressure on opposing teams with his speed on the bases and uses it to excel in center field. He has a compact left-handed swing with a gap-to-gap approach. He’s a Xavier University commit.

Previous: Bill Buckner: underrated, underappreciated
Next: Brewers have whiffed more than connected with No. 1 picks in last decade