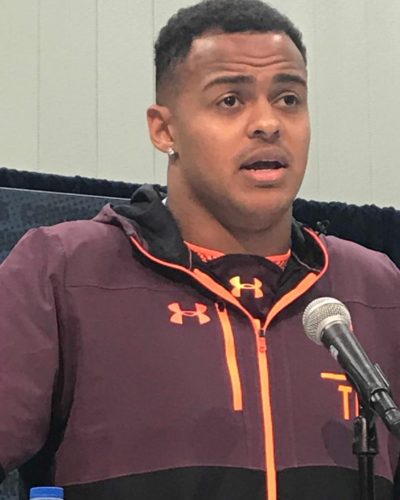 INDIANAPOLIS — There’s little doubt the Green Bay Packers would like to bolster their tight end position during the upcoming NFL draft.

The Packers have shown a keen interest in Alabama tight end Irv Smith, whom they formally interviewed at the NFL Combine last week and have invited to Green Bay before the start of the draft on April 25.

The Packers also have more than a passing interest in another tight end: Noah Fant of Iowa, who they also formally interviewed at the Combine.

There is growing speculation among some NFL personnel people the Packers will expend one of their two first-round picks – they have the 12th and 30th overall picks – on either Smith or Fant.

Fant and Smith came to the Combine as projected late first-round selections and, while Smith fared well in the testing, the 6-foot-4, 249 pound Fant was sensational.

Coming off a strong junior season at Iowa, where he 39 receptions for 519 yards and seven touchdown receptions, Fant put on a show at the Combine. He ran the 40-yard dash in 4.50 and 4.55, blistering times for a tight end, and then exhibited the leaping ability of a high-flyin’ NBA player with a vertical leap of 39.5 inches. And Fant showed he’s strong, compiling 20 bench press reps.

He did precisely what he said he would do.

“In my opinion, I feel like I’m a great overall tight end,’’ Fant said a day prior to his testing. “I feel like after my field workout, people will really get to see my speed, get to see my jumping ability. At the bench, they’ll get to see my power.

“So, people really haven’t gotten to see that yet, so I’m hoping to put up big numbers.’’

Fant said he’s watched countless films of Kelce and has patterned his game after him.

Fant also loves his mother, Kathy, whom he says has been perhaps the biggest inspiration in his life.

“She’s raised six kids,’’ Fant said. “It’s hard to do that as a woman in general. She’s got her education; she’s a computer software programmer.

“I look up to her as much as I look up to my dad (Willie).  She portrays that hard-working woman who’s not afraid to do anything in the world. I love her to death.’’

Fant said Kathy’s support, along with the rest of his family’s backing, made his decision to leave Iowa early an easier decision. It’s a decision he believes was the proper one.

“I would say now is the time if any to come into the NFL, with the way they’re using tight ends, the way they’re using them more in the pass game but also in the run game,’’ said Fant, whose major was biology. “The NFL is transitioning into a lot more pass, with guys like Travis Kelce and Jimmy Graham and Rob Gronkowski, who are catching a lot of passes.’’