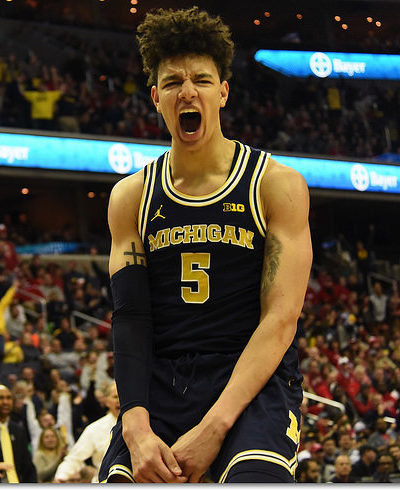 When it comes to the NBA draft, the Milwaukee Bucks, for better or worse, really don’t care what the rest of the league thinks.

The Bucks drafted Rashad Vaughn in the middle of the first round two years ago when the consensus opinion among NBA personnel was that the shooting guard from Nevada-Las Vegas was a late first-round pick.

Las year, the Bucks expended their top pick, the 10th overall, on power forward-center Thon Maker. Most NBA teams projected him to be selected in the middle of the first round. Some teams had him ranked even lower.

Thursday night, the Bucks showed their independence once again by drafting D.J. Wilson with the 17th overall pick. Just like when they took Vaughn and took Maker, the reaction among many NA officials was of near disbelief.

“That was definitely a surprise, maybe the biggest surprise of the first round,’’ a veteran Eastern Conference player personnel director said. “We had him going late in the first round, early second, somewhere between 28 and 32.’’

An Eastern Conference coach said: “I don’t think it was shocking, but it was surprising for sure. We had him ranked lower than the Bucks did, toward the end of the first round. I think that’s where a lot of people had him.

“But Maker was stretch and Vaughn was a stretch. That’s been. Milwaukee’s thinking. With them, it’s like ‘If we like him, we’re going to take him and we don’t give a damn what others think’ .’’

And this from a longtime Eastern Conference personnel director: “Our guys thought he (Wilson) was erratic and wasn’t a good rebounder and that he shot up (the draft board) just because of his play in postseason, which is always problematic.’’

The Bucks selected Wilson ahead of UCLA forward T.J. Leaf and Wake Forest forward John Collins. All three of the aforementioned NBA officials agreed they would have drafted Leaf and Collins ahead of Wilson.

Close but no cigar

A multi-team, blockbuster trade apparently was close to being consummated on draft night.

According to two league sources, the Cavaliers, Pacers and Nuggets had serious discussions about a trade that would have sent power forward Kevin Love from Cleveland to Denver, Paul George from Indiana to Cleveland and multiple draft picks and players to Indiana.

However, a source said the proposed deal was nixed by Cavaliers owner Dan Gilbert. Said an Eastern Conference official: “It would have been very, very interesting to see if that would have gone down if Griffin was still there.’’ He was referring to David Griffin, the former Cavaliers general manager who parted ways with the team earlier this week.

5) Despite having the 19th pick, Atlanta still wound up with Wake Forest forward John Collins, who numerous teams had projected to as a late-lottery pick.

4) Charlotte getting Kentucky shooting guard Malik Monk at No. 11 was an absolute steal. Monk and Hornets point guard Kemba Walker are undersized but they can flat-out put the ball in the hole.

3) The Trail Blazers acquiring Gonzaga big man Zach Collins in a trade. With a big-time backcourt of Damian Lillard and CJ McCollum, the Blazers now have a potential big-time player in the frontcourt.

2) The Heat had one gaping hole and they filled it quite nicely by picking Kentucky power forward Bam Adebayo who should perfectly complement center Hassan Whitside.

1) Minnesota obtaining Jimmy Butler from Chicago was precisely what Dr. Tom Thibodeau ordered. With talented youngsters Karl-Anthony Towns and Andrew Wiggins, the T-Wolves are ready to take off in the Western Conference.

Former University of Wisconsin standouts Bronson Koenig and Nigel Hayes were passed over in the draft, but they quickly found teams to play for the summer league: Hayes with the Knicks and Koenig with the Bucks. Koenig, who had some impressive workouts just before the draft, fielded offers from approximately eight teams.

Previous: NBA trade winds intensifying
Next: Tapp-ing into the Numbers: Nelson breaks through with complete game