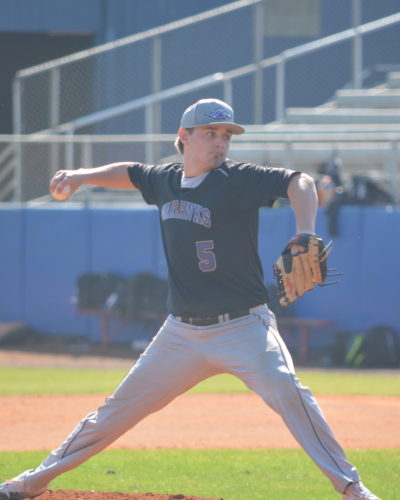 Austin Jones dominated opposing high school hitters as a senior right-handed pitcher for Wauwatosa West (Wis.) in 2013, posting a 0.80 ERA and 131 strikeouts in 80 innings on his way to earning 2013 Wisconsin Baseball Coaches Association Player of the Year honors.

Despite his success at the high school level, Jones received little college interest, not committing to a baseball program until late into his senior season. He eventually decided on Division III University of Wisconsin-Whitewater.

“I think understanding the tradition Whitewater has not only athletically, but academically as well,” Jones said. “In the end, baseball was the biggest factor. I knew I was going to come here and win. I hoped to contribute early to that success.”

Under recruited throughout high school, Jones used the lack of attention from universities as motivation. As a freshman at Whitewater in 2014, Jones went 6-1 with a 2.27 ERA in 19 appearances.

“Over the last few years since I’ve gotten to Whitewater, I think Wisconsin is starting to get a little more credit baseball wise,” Jones said. “But back when I graduated (high school), a lot of people didn’t give Wisconsin a lot of credit in baseball.

“I hoped ending up in Whitewater that I’d still be able to showcase my talents and show people that overlooked me that they made a mistake.”

Although he’s pitching at the Division III level, Jones has a shot to go in the top 10 rounds of June’s MLB First-Year Player Draft. Jones isn’t a stranger to the draft, as the Chicago Cubs selected him in the 26th round in 2016.

Jones skipped the opportunity to turn pro last season, instead returning to Whitewater for his redshirt junior year in 2017.

A major reason Jones returned to college for another year was to increase his draft stock, after pitching sparingly in 2016. In his second start of his sophomore season in 2015, Jones suffered a season-ending elbow injury that required Tommy John surgery and kept him out most of last season.

“Coming off Tommy John I had only thrown 12 innings before getting drafted,” Jones said. “I felt like I had a lot more to show and didn’t feel like I was at full strength yet. I felt like I wasn’t quite ready and needed another year to get everything ready for the next level.”

A 6-foot-2, 205-pound right-hander, Jones has a three-pitch mix, featuring a fastball, curveball and changeup. His fastball sits in the low-90s and peaks at 94 mph.

“I have a good understanding of the game,” Jones said. “I love baseball. I watch a ton of baseball. Just understanding the little nuances of the game are big for me. I think going through situations and that thought process is something I’m good at.”

In his first full season back from surgery, Jones is happy with his performance this spring and eager for the future. With six games left in the regular season until postseason play begins, Jones hopes to continue to progress on the mound.

“I have to start zoning in on spots more,” Jones said. “Just having command of all my pitches. I know someone took a chance on me once in the draft. If I show what I’m capable of doing, I think someone will again.”

Previous: Tapp-ing Into The Numbers:
Next: NBA Officials Give Their Lottery Picks