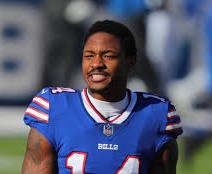 Jaire Alexander is the highest-paid defensive back in the NFL.

If the Packers are going to upset the heavily-favored Bills today, Alexander will simply have to perform like the best DB in the league.

Alexander, in all likelihood, will be given the unenviable assignment of tracking Bill star receiver Stefon Diggs. While Diggs doesn’t get the national notoriety like some of the other elite receivers in the league — i.e. Cooper Kupp or Davante Adams — he is unquestionably one of the premier players at his position.

In six games this season, Diggs had had five with seven or more receptions, including 11 against Tennessee and 10 against Kansas City.

Diggs, now in his eighth pro season, is clearly one of the biggest reasons the Bills are 5-1 and 11-point favorites over the Packers.

If Alexander, who has elite cover skills, does his job and can, at the very least, neutralize Diggs, the Packers could make things quite interesting tonight and perhaps even spring an upset.