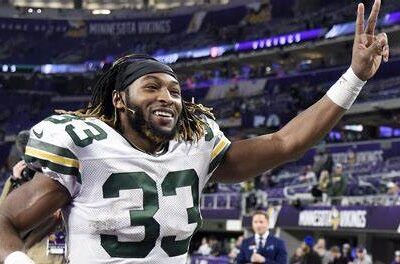 The NFL schedule-makers have done the Green Bay Packers another favor.

Just like last season, when the Packers were blown to smithereens by the New Orleans Saints 38-3 and then played the pathetic Detroit Lions the following week, the Packers will be able to nicely recover from their 23-7 shellacking to the Minnesota Vikings last Sunday by playing the Chicago Bears today at Lambeau Field.

Now, the Bears aren’t really inept. They have some nice components as they showed in their regular-season opener when they stunned the heavily-favored Los Angeles Rams 19-10.

Young Bears quarterback Justin Field demonstrated in the second half of that game that he can be a game-changer, especially when he has to improvise. On at least two occasions against the 49ers, who have a terrific defense, Fields took matters into his hands and created big plays.

But Fields’ biggest problem is his lack of consistency. Can he fashion another performance against the Packers like he did against the 49ers? His track records says an emphatic no.

But even if Fields delivers, the Packers should still prevail. They are a vastly superior team and only need to properly use their vast array of resources. Specifically, they have to make Aaron Jones, their gifted running back, an integral part of their offense – which they didn’t against the Vikings.

Jones had a measly five carries against the Vikings. Ridiculous. He needs to be the focal point of the Packers’ offense, at least until the Packers figure out their receiving corps issues.

Packers coach Matt LaFleur, more than anyone, knows the value of Jones to his team. You can safely assume he’ll make sure Jones isn’t ignored today against the Bears.

Previous: Packers are set to bear down
Next: Aaron Jones has uncanny knack for scoring touchdowns