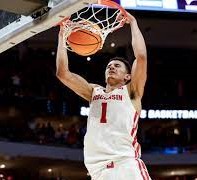 “With the 10th pick in the 2022 NBA Draft, the Washington Wizards select … Johnny Davis, Wisconsin.”

With that announcement, Badgers’ guard Johnny Davis became the fourth player from a Wisconsin-based college since 2000 to be chosen with a Top 10 pick in an NBA Draft. He joined Dwyane Wade (5th in 2003), Devin Harris (5th in 2004) and Frank Kaminsky (9th in 2015).

Based on the history of the NBA Draft (1947-2022) presented on the basketball-reference.com website, there have been 21 players from schools located in Wisconsin that were chosen with one of the first 25 selections of an NBA Draft. Marquette University and the University of Wisconsin each have 10, while UW-Stevens Point saw Terry Porter get drafted with the 24th pick in the 1985 NBA Draft.

Here is a look at the players from Wisconsin-located colleges who were chosen in an NBA Draft within the first 25 picks.

The University of Wisconsin-Milwaukee just missed having their first Top 25 pick in the NBA Draft this year. One-and-Done player Patrick Baldwin Jr. was selected in this draft with the 28th pick of the Golden State Warriors.

One final stat: Of the 21 players from Wisconsin-located colleges listed above who were Top 25 draft choices, the player that played in the most career NBA games was Terry Porter with 1,274. Michael Finley tops all University of Wisconsin players with 1,103 NBA games, while Dwyane Wade leads Marquette University players with 1,054 NBA contests played.