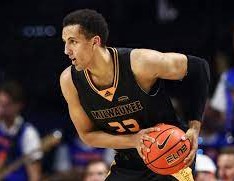 Every NBA draft has a so-called mystery man.

He’s a player who teams have markedly varying opinions on his status in the two-round draft.

This year’s draft, which will be conducted on Thursday night, actually has several “mystery’’ men. But the biggest one is clearly Patrick Baldwin, a highly skilled forward from Wisconsin-Milwaukee who is coming off a most trying season.

Baldwin, a five-star recruit coming out of Sussex (WI) Hamilton High School who was coveted by every major college in the country, seemingly couldn’t catch a break in his one and only season at Milwaukee.

He struggled with a chronic ankle injury, came down with COVID and learned his mother, Shawn, was dealing with a serious health issue.

The 6-foot-10 Baldwin finished his season from hell, averaging 12.1 points and 5.8 rebounds in just 11 games. His draft stock not surprisingly plummeted. Instead of being a sure-fire lottery selection, Baldwin’s draft status is now one of the great unknowns.

“He has the widest range of any player in this draft.’’

Indeed. Based on talent alone, Baldwin is still a lottery-caliber player. He has an exquisite game: he is a strong perimeter shooter, a deft balhandler and possesses exceptional court vision with high-end passing skills.

But the ankle injury, his rather slim build and perceived lack of physical toughness has raised red flags among NBA officials. Many contend selecting Baldwin is a true roll of the dice.

The general consensus among NBA personnel is that Baldwin will be drafted late in the first round. Sources said a couple of teams are seriously considering moving into the early 20s of the first round with the intention of selecting Baldwin, whose game resembles that of Boston star Jayson Tatum.

There are also whispers the Milwaukee Bucks , who scouted Baldwin on numerous occasion, are interested in taking Baldwin with the 24th overall pick.

But whether the Bucks would choose a local product is the question: In the 2015 draft, the Bucks selected guard Rashad Vaughn with the 17th overall pick and passed on Wisconsin star and Sheboygan native Sam Dekker, who was taken by the Houston Rockets with the 18th pick.

If the Bucks keep their first-round pick, they’ll have their choice of several wings and guards. Among the players expected to be chosen in the vicinity of the Bucks’ pick are Notre Dame Blake Wesley and Dalen Terry of Arizona, both combo guard, and shooting guards Jaden Hardy of the G League Elite, Max Christie of Michigan State and Caleb Houstan of Michigan. Among the wing prospects are MarJon Beauchamp of the G League Elite, Baylor’s Kendall Brown, who is ultra-athletic with a 41-inch vertical but raw, and Ohio State’s EJ Liddell.

Three players who are generally regarded as early second-round picks whom the Bucks have shown interest in are Wendell Moore of Duke,  Christian Braun of Kansas and Peyton Watson of UCLA. All are wings.

Tennessee point guard Kennedy Chandler could also be on the board when the Bucks pick. Chandler is an electrifying performer but his lack of height – he’s 6 feet – has many teams concerned and grade him as a second-round prospect.

The cluster of guard who figure to be available for the Bucks is similar to the 2018 draft. That’s when Milwaukee chose Donte DiVincenzo, a shooting guard. The next four players chosen were also shooting guards: Lonnie Walker (San Antonio), Kevin Huerter (Atlanta), Josh Okogie (Minnesota) and Grayson Allen (Utah).

Previous: NBA draft could be another exercise in futility for Bucks
Next: Burnes is in ‘striking’ distance of Brewers records