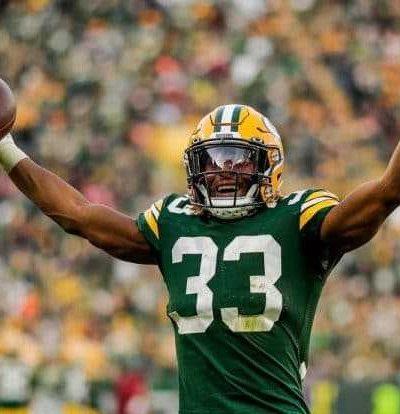 Aaron Rodgers wasn’t the only Packer to have a game not to remember last Sunday in the team’s embarrassing 38-3 setback to the Saints.

The Packers other Aaron – Jones – hardly had a performance to remember, either.

While much was made of Rodgers’ brutally-bad showing in the debacle – and justifiably so — Jones’ sub-par effort was somewhat overlooked. It shouldn’t have been.

Jones is one of the NFL’s elite running backs and an integral piece to the Packers’ offensive puzzle. Only three other running backs in the Roger Goodell’s 32-team kingdom – Derrick Henry (2,027), Dalvin Cook (1,557) and Jonathan Taylor (1,169) — gained more yards last season than Jones, who totaled 1,104 yards.

But Jones was awful against the Saints, although it wasn’t totally his fault. Packers coach Matt LaFleur candidly acknowledged his role in Jones’ dismal outing. Indeed, Jones ran the ball a mere five times – and produced a paltry nine yards.

But don’t expect Jones – just like Rodgers – to underachieve for the second straight week. The Packers, after all, are playing the lowly Lions on Monday night.

One of the 49ers stars was Eli Mitchell. Never heard of him? You aren’t alone. He’s a rookie running back, whom the 49ers took in the sixth round of the 2021 draft. The unheralded Mitchell ran for 104 yards on 19 carries.

Mitchell isn’t remotely close to being as good as Jones. If Jones gets a comparable number of touches against the Lions, he’ll accumulate even more yards than Mitchell and the Packers will dispatch the Lions just as easily as the 49ers.

Previous: Packers can ill-afford being overconfident against Lions
Next: 49ers defense will be X-factor