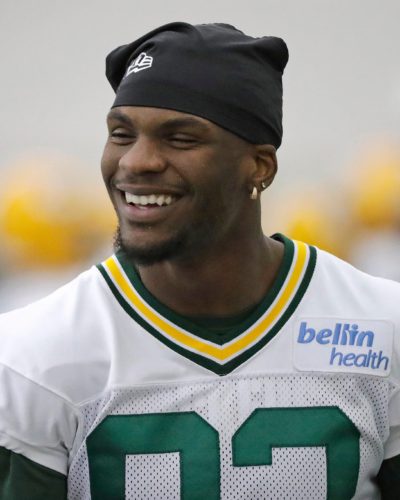 One of the few bright spots for the Packers in their 31-26 loss to the Buccaneers in last season’s NFC Championship game was the play of Marquez Valdes-Scantling.

The lanky and exceptionally fast Valdes-Scantling arguably played the best game of his pro career. He caught four passes for a game-high 115 yards. One of his receptions went for 50 yards.

After that highly encouraging performance against the Buccaneers, the Packers obviously had to feel Valdes-Scantling had finally found his niche, that there wasn’t any urgency to draft a big-time receiver in the first or second rounds of the 2021 draft, or acquire one via a trade or free agency.

But after two games this season, Valdes-Scantling hasn’t remotely come close to duplicating his showing against the Buccaneers. In fact, there has to be major concerns among the Packers brass about whether he’ll ever develop into a quality and reliable complement to star Davante Adams.

Valdes-Scantling has a mere three catches this season for a mere 17 yards. Considered the Packers’ most dangerous vertical threat, His longest reception has been 10 yards.

Valdes-Scantling’s lack of productivity is particularly baffling because he’s been targeted 12 times – with only Adams having been targeted more on the team.

If the Packers are to upend the 49ers today – the 49ers are 3-point favorites – Valdes-Scantling has to show up. He has to give the Packers a legit deep threat to loosen the 49ers secondary and, more importantly, make the 49ers pay for their inevitable schemes to neutralize Adams.

Previous: 49ers defense will be X-factor
Next: Ex-Wisconsin prep stars — Lux and Kelenic — give Dodgers, Mariners a lift