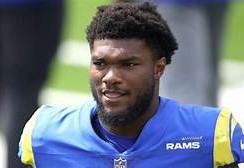 We’re going to find out today whether the Green Bay Packers learned their lesson.

Last season, in the NFC Championship game against the San Francisco 49ers, the Packers were sliced and diced up by a devastating 49ers running game. The 49ers racked up an insane 285 yards on the ground, with Raheem Mostert leading the way with 220 yards and four touchdowns.

The 49ers controlled the game so much with their rushing attack that they had the game well in hand at halftime, boasting a comfortable 27-0 advantage. The 49ers won 37-20.

Since that debacle, the Packers have done a respectable job in shutting down the run. They conclusively showed their capabilities of keeping a big-time runner in check a few weeks ago when they limited the game’s best rusher, Tennessee’s Derrick Henry, to 98 yards on 23 carries.

The Packers won’t be facing any big-time running back when they host the Los Angeles Rams today at Lambeau Field in an NFC second-round playoff game.

But the Rams do have a running back who is getting hot at the right time. In Cam Akers, the Rams have a runner that could make or break the Packers’ chances of winning.

Akers, a former Florida State standout who was taken with the 52nd overall pick in the 2020 draft – just 10 spots in front of where the Packers selected A.J. Dillon – is coming off an impressive 131-yard rushing performance in the Rams’ 30-20 opening-round playoff victory over Seattle.

Akers’ timely effort wasn’t a fluke. Three weeks prior, in a game against the New England Patriots, Akers ran for 171 yards as the Rams rolled to a 24-3 triumph.

You can safely assume the Rams will give the ball to Akers early and often against the Packers. That’ll be especially true if Rams quarterback Jared Goff struggles throwing the ball. Goff is still recovering after having surgery just over two weeks ago on his broken right thumb.

Plain and simple, the Packers have to focus on preventing Akers from going wild like he did against the Seahawks and Patriots. If they can limit him to 80 or fewer yards, and keep him from breaking off any long runs, the Packers will be going to the NFC championship game for the second straight year.

Previous: Packers’ offensive efficiency is the envy of the NFL
Next: Zielinski: Packers will bend but not break against Rams