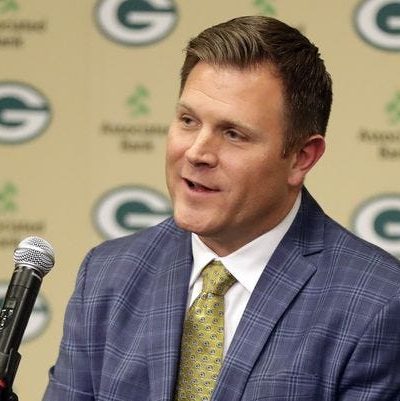 Green Bay Packers quarterback Aaron Rodgers has fashioned another outstanding season, but not one good enough to be this season’s NFL Offensive Player of the Year. That distinction will likely go to Baltimore quarterback Lamar Jackson or Seattle quarterback Russell Wilson.

Matt LeFleur has done an amazing job in his first season as the Packers head coach but he could be edged for Coach of the Year honors by San Francisco’s Kyle Shanahan or Baltimore’s John Harbaugh.

And then there’s the NFL Executive of the Year award, chosen by the Pro Football Writers of America. Packers general manager Brian Gutekunst appears to be a serious candidate, if not the top candidate, for the honor.

Gutekunst is among several GMs who have put their teams in position to be playoff bound. Two other GMs who have certainly earned gold stars for their work are San Francisco’s John Lynch and Baltimore’s Eric DeCosta. Baltimore and San Francisco have the best records at 11-2 in the AFC and NFC, respectively.

As for DeCosta, he made a series of shrewd moves via free agency, the draft and trades. DeCosta shored up the Ravens by trading for middle linebacker Josh Bynes and cornerback Marcus Peters. In the draft, DeCosta hit the tri-fecta as all three of his top selections are starters: wide receivers Marquise Brown and Miles Boykins and edge rusher Jaylon Ferguson.

And last but certainly not least, DeCosta signed two outstanding veterans: free safety Earl Thomas and running back Mark Ingram, who is well on his way to a 1,000-plus yard season and who serves as a perfect complement to Jackson.

While DeCosta and Lynch have unequivocally upgraded their respective teams rosters, so has Gutekunst who is in his second season as the team’s general manager.

Gutekunst deftly used free agency and the draft in bolstering the Packers to a surprising 10-3 record. In free agency, he hit grand slams by signing free agent outside linebackers Za’Darius Smith and Preston Smith.

The Smiths not only are the Packers’ best defenders, they rank among the league leaders in sacks: Preston Smith has recorded 11.5 sacks, the sixth most in the NFL, and Za’Darius Smith has 10 sacks, tying him for ninth place in that category.

Another of Gutekunst’s plum free-agent signings was veteran safety Adrian Amos, who has brought experience and productivity to a young secondary. Amos, now in his fifth pro season after spending the previous four with the Bears, is the Packers’ second-leading tackler with 74.

While Gutekunst added three impact free agents to the Packers’ heretofore shoddy defense, he improved the offensive line by signing yet another FA in right guard Billy Turner, who has performed more than solidly from day one.

To go along with the aforementioned four free-agent starters, Gutekunst added two starters via the draft: safety Darnell Savage and left guard Elgton Jenkins. Both appear locks for the all-rookie team.

The Packers failed to make the playoffs the last two seasons because they had a plethora of holes, Now they’re heading to the playoffs, thanks in large measure to Gutekunst plugging them.

Previous: Ervin makes immediate impact for Packers
Next: NFC East is anything but a beast