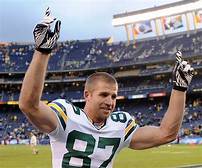 Home » Guest Post » One current Packer, one ex Packer among top 8 in TDs for the decade

Which NFL player has had the most touchdowns this decade?

Which player will end this decade with the most TDs?

The 2019 NFL season will be the last of this decade. When we close the book on this season, who will be the league’s most prolific TD machine?

After the second week of this season, we have a three-way tie for the most TDs this decade. The three? The recently-retired (but will he stay retired?) Rob Gronkowski, new Kansas City running back LeSean McCoy, and a player who has been in the news a bit these last few weeks… Antonio Brown. Each player has 80 TDs this decade. Brown scored a TD last week in his first game with his new team, the New England Patriots, to create the three-way tie.

If you were a betting man (or woman) who would you think would end the decade with the league’s most TDs? You might lean towards McCoy, especially if he becomes a major cog in the Chiefs’ offense. Gronk is probably a long, long shot, but who knows, he could come out of retirement at some time this campaign.

Brown, on the other hand, might be a good bet, but with the black cloud hanging over him because of his off-the-field escapades, he may not even finish the year on an NFL roster.

Behind this trio are a pair of “retired” players, Dez Bryant and Marshawn Lynch, both with 75 TDs this decade. Tight End Jimmy Graham and running back Adrian Peterson have both scored a TD this season and are tied for sixth on the list with 72 touchdowns. Neither look like prime candidates to approach double-figures in TDs this season and seriously challenge for the title of most TDs this decade, but you never know.

Here is a look at the players who have scored 60 or more TDs this decade.

Previous: Packers are virtually unbeatable when …
Next: Zielinski: Packers will keep rolling against Broncos