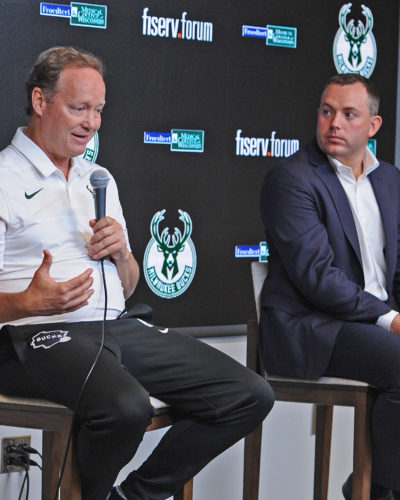 Home » Gery's Blog » Will Horst now be paid like a real NBA GM?

The Milwaukee Bucks official thought his buddy was simply pulling a prank on him.

After taking a call from his friend on that late night in June of 2017, he listened for a few minutes before breaking out in laughter. He continued to laugh before coming to the realization that it wasn’t a bad joke but the truth.

The caller revealed the Bucks, after an extensive and at times bungling search, had finally hired a new general manager. And it wasn’t anyone from the slew of candidates publicly bandied about. Rather, it was one of their co-workers, one of their co-workers who ranked closer to the bottom than the top on the Bucks’ organizational chart.

The fact the Bucks ownership group had presented the general manager reins to a young and totally unproven Jon Horst shocked both gentlemen. They were hardly alone.

Virtually the entire NBA community shook their collective heads in bewilderment. Many of them had never even heard of Horst and some candidly conceded they wouldn’t recognize him if they ran into him.

Indeed, the Bucks’ decision to promote Horst was perhaps the most startling in franchise history. Nobody saw this coming, including the owners.

“He was the last guy I ever thought of for that job,’’ the Bucks official who took the call said of Horst, whom many of his peers called “Jon Boy’’ after the youthful and naïve TV character from The Waltons.

Horst wasn’t on the Bucks’ A-list of candidates for the GM job, either. Justin Zanik was. He was the team’s assistant general manager and generally regarded as a shoo-in to replace John Hammond who, despite having drafted Giannis Antetokounmpo and Malcolm Brogdon and having traded for Khris Middleton, realized his services weren’t coveted in Milwaukee. Hammond thus took a similar position with the Orlando Magic, working with his longtime friend Jeff Weltman, the Magic’s president of basketball operations.

Zanik not only boasted front office experience but had a firm handle on the rest of league, having also been a well-respected agent.

Finally, after a long, drawn out GM search that included interviewing several other candidates besides Zanik, Horst became the Bucks owners compromise choice. The trio of owners liked him and knew they would be saving a ton of money by hiring him.

“There wasn’t much of negotiation in hiring Horst,’’ a source familiar with the GM search said. “It was pretty much a ‘Take it or leave it’ offer.’’

While Horst was elated with becoming the Bucks GM, he rankled many front office executives and their agents. Horst agreed to a paltry annual salary of $500,000, according to several NBA officials. One person who knows Horst claimed he wasn’t even paid that much.

“That was insulting to every GM in our league,’’ an NBA executive said earlier this week. “It was the lowest salary for a GM in our league – by far. The next lowest (GM) was paid $1 million.’’

Not surprisingly, word is circulating the NBA that Horst is seeking a raise via a contract extension. He has just one year left on his original three-year deal. Sources said the Bucks owners are amenable to working out a new deal in light of the Bucks’ banner season that saw them win a league-high 60 regular season games before being upset by Toronto in the Eastern Conference Finals.

“If you asked me what would be a fair deal for him (Horst), I’d say around $3 million (a year),’’ an NBA executive said. “That’s about the average salary for a GM and I think he’s regarded as an average GM.

“But knowing those guys (the owners) I don’t think he’s going to get even that.’’