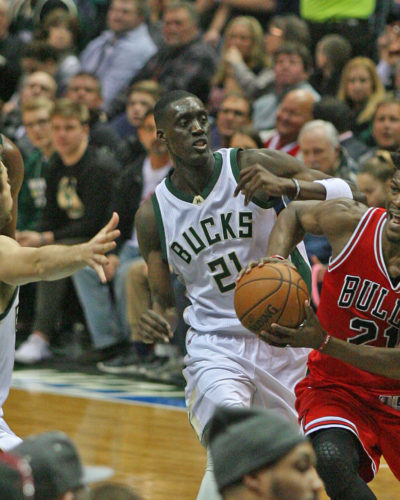 Where have you gone Tony Snell?

Once considered an important piece for the Milwaukee Bucks, Snell has virtually faded into the oblivion during the on-going playoffs.

The 27-year-old Snell didn’t play a single minute in Game 1 or 3 of the Bucks’ Eastern Conference championship series against the Toronto Raptors. He got a mop-up three minutes in Game 4.

The fact of the matter is Snell has been mostly a cheerleader throughout the entire Bucks’ playoff run. He’s averaging a paltry 3.1 minutes in nine playoff appearances.

That’s a far cry from the last two seasons when Snell was a permanent fixture in the Bucks’ rotation. Two seasons ago, when Jason Kidd was the Bucks head coach, Snell not only started all six games for the Bucks in the playoffs but played major minutes: 30.8 a game.

Even last year, after Kidd was fired and replaced by Joe Prunty, Snell still appeared in all seven playoff games against Boston and still was given significant playing time at 19.1 minute a game.

But now, with Mike Budenholzer at the coaching helm, Snell has become a mere afterthought. His future with the Bucks is indeed murky.

Because the Bucks are in a brutal salary-cap dilemma, there is continual speculation Snell will be traded during the offseason. Snell, who is being paid $10.60 million this season, is owed $11.39M next season and has a player option for $12.17M the following season.

According to some NBA officials, the Bucks are eager/desperate to dump Snell’s contract in an attempt to lighten what appears to be their inevitable luxury tax penalty.

Of course, teams aren’t salivating to take Snell off the Bucks’ hands, especially with his bloated salary.

“He’s just not a good value,’’ an NBA executive said. “I know they brought in some guys at his spot like (Pat) Connaughton but his (Snell’s) play has leveled off, too.

“I think the only way they can move him is if they package him with a pick, for instance. But he’s already traded two (future) No. 1s, so that won’t be easy to do that, either.’’

The executive was referring to Bucks general manager Jon Horst, who has already dispatched two of his team’s biggest draft chips, sending a first-rounder next summer to Phoenix in the Eric Bledsoe deal and sending another first-rounder to Cleveland two years later in the John Henson-Matthew Dellavedova for George Hill trade.

Whether another team would be receptive to accept a future Bucks’ second-round pick to take Snell off their books is iffy.

For now, though, Snell has to bide his time and be the good soldier. On the plus side for the veteran swingman, he is padding his savings account. He is the only Bucks player who has playoff bonuses in his contract.

After receiving a $100,000 bonus for appearing in 60-plus regular-season games (He appeared in 74), Snell pocketed another $100,000 for playing in at least 75 percent of the Bucks’ semifinal playoff games against Boston.

It appears Bucks coach Mike Budenholzer’s patience with Bledsoe is wearing thin, too. Budenholzer had Bledsoe on the court for only 20 minutes in Game 4 – easily the fewest minutes Bledsoe has played in the entire playoffs.

In his last three outings against the Raptors – two of which were Bucks losses – Lopez has totaled 30 points – just one more than his Game 1 output. Also, in the last three games, Lopez has misfired on nine of his 14 3-point attempt.