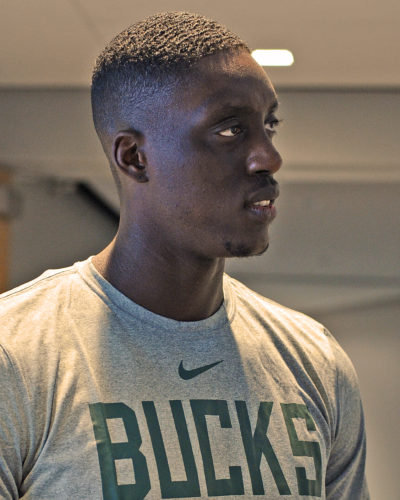 One thing has been amply apparent through the Bucks’ five Eastern Conference Finals games against the Toronto Raptors:

They don’t have anyone who can check Kawhi Leonard.

Leonard has had his way in virtually every game. It hasn’t mattered who Bucks coach Mike Budenholzer has assigned to guard the Raptors’ exceptionally-talented forward.

Khris Middleton doesn’t have the lateral quickness to stay with Leonard on the perimeter and Malcolm Brogdon is too short to contest Leonard’s shot, especially when he gets in the lane.

Despite their defensive shortcomings, don’t expect Budenholzer to make any major adjustment on Leonard, who has put the Raptors on his back this series.

In the five games against the Bucks, Leonard has scored at least 31 points on four occasions: back-to-back 31-point performances to start the series and then a 36-point explosion in Game 3 and a 35-point outing in Game 5.

Leonard is unequivocally the principal reason the Raptors have grabbed a 3-2 lead in this best-of-seven series against the top-seeded Bucks.

So, what can Budenholzer do to keep Leonard in check with the Bucks’ season on a respirator?

How about instead of having Giannis Antetokounmpo defend Leonard periodically, let him guard Leonard the majority of the time. Yes, Antetokounmpo, the Bucks’ primary scoring weapon, could get into foul trouble, but that’s a risk worth taking at this precarious stage.

Or, better yet, how about actually letting Tony Snell see some court time? The veteran swingman is, in the opinion of many NBA officials, the Bucks’ best perimeter defender. He’s got better size than Brogdon and he’s got better footwork than Middleton.

Inexplicably, Snell has been glued to the bench in the playoffs. He’s played just two games against Toronto for a measly six minutes.

That is a little strange and, perhaps inexcusable, considering Snell acquitted himself well during the regular season against Toronto. In four games against the Raptors, Snell played 16:24, 19:30, 13:31 and 15:13 minutes. The Bucks won three of them.

It should also be noted that no one on the Bucks knows Leonard’s game better than Snell. Leonard and Snell are longtime friends, having been teammates on the Martin Luther King High School team in Riverside, Calif.

Snell and Leonard have also trained with each other on numerous occasions and there isn’t a move Leonard could make that would fool Snell.

If I was Budenholzer, I would play Snell a minimum 15 minutes. I don’t expect that to occur, of course, as Budenholzer is a conservative coach with a history of seldom making any radical rotation changes in the playoffs.

But these are desperate times for the Bucks and Budenholzer needs to be open to the idea of using Snell, especially if Leonard gets off to a torrid start and takes over like he has in every game.