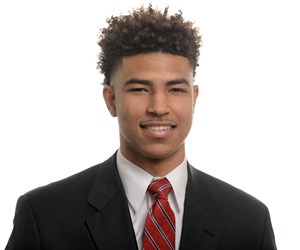 While the Milwaukee Bucks are creating a buzz in the NBA playoffs, they are also quietly doing some important work behind the scenes.

The Bucks scouting department is scrutinizing prospects for the June draft. After watching countless players during the collegiate season and traveling overseas to check out draft-eligible players, the Bucks are now getting up-close-and-personal looks in private workouts in Milwaukee.

One took place Tuesday with team officials working out several intriguing prospects, including three who were highly touted prep players before attending their respective colleges.

Two of them were freshmen guards Quentin Grimes (pictured) and Devon Dotson of Kansas. Both were five star recruits coming out of high school and turned in solid freshmen seasons with the Jayhawks.

Grimes, a 6-foot-5 shooting guard who was ranked as the eighth best prep player by Rivals, started 36 games for Kansas and averaged 8.4 points during the regular season before upping his average to 13.3 points in the Big 12 Championship tournament.

As for Dotson, a 6-2 point guard who was ranked 18 by Rivals, he also started all 36 games last season and steadily improved to the point where he was selected to the Big 12 all-tournament team.

Joining Dotson and Grimes at the Bucks’ workout were EJ Montgomery of Kentucky and Dererk Pardon of Northwestern. Montgomery, a 6-10 power forward, was also a five-star recruit coming out of high school and ranked 11th in the country by Rivals, played in each of Kentucky’s 37 games and started 10 of them.

Montgomery averaged 3.8 points and 4.1 rebounds and is regarded as a good shotblocker.

Pardon, a 6-8 forward, wasn’t regarded as a blue-chip prospect in high school but exhibited tremendous growth during his career at Northwestern.

As a senior, Pardon enjoyed a breakout season, making his presence felt at both ends of the court. He not only led the Wildcats in rebounds at 7.8 a game but was the team’s second-leading scorer at 14 points a game.

The aforementioned players –all considered potential second-round draft candidates — will be among a large contingent of players who’ll come to Milwaukee for workouts before the June 20 draft.

The Bucks currently have one pick in this year’s draft, that being in the first round. Their second-round pick has been conveyed to the Sacramento Kings.