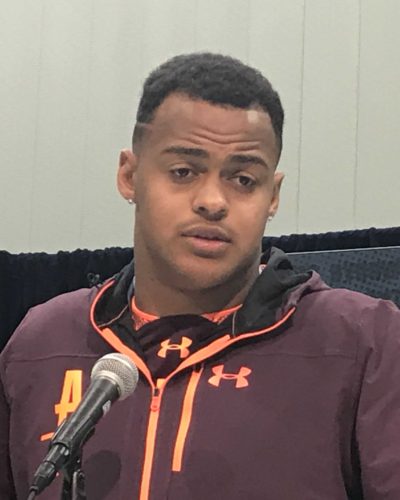 The Green Bay Packers will embark on arguably one of the most critical drafts in franchise history on Thursday night.

The Packers have watched the playoffs from the sidelines the last two years, but will have a golden opportunity to significantly bolster their talent pool with three, top 44 draft picks. Besides possessing a pair of first-round picks – Nos. 12 and 30 – they have a high second-round pick as well: No. 44  overall.

Now, from this perspective, Gutekunst should use his top three picks to shore up the following positions, although not necessarily in this order: tight end, right offensive tackle and edge rusher.

The Packers’ first pick will likely dictate what they do with their other high picks. At 12, they most certainly will have options to plug anyone of those positions.

Here are five potential candidates for the Packers at 12, with the order in which I rank them:

NOTES: Played somewhat in the shadow of fellow Hawkeye tight end T.J. Hockenson, but still had a highly productive final season with 39 catches for 519 yards and seven touchdowns … Nicely bulked up his body since the end of his collegiate career. … Supreme athlete who has NBA-type leaping ability as illustrated by his 39.5-inch vertical at the NFL Combine. …He was also clocked at a swift 4.5 seconds in the 40. … Associated Press All-America third-team selection. … Has considered becoming an orthopedic surgeon after his NFL career.

OBSERVATIONS: The Packers have a prime-time receiver in Davante Adams but they desperately need another receiving weapon to preoccupy the safeties down the middle of the field. Fant’s blocking skills have been questioned, but otherwise he has the package: big (6-4, 249), strong and fast. He is a matchup nightmare. While some NFL teams are reluctant to tab a tight end with a high pick like the Packers possess, Fant’s physical attributes and upside are hard to pass up,

OBSERVATIONS: The 6-foot-5, 260-pound Sweat was a beast at the Senior Bowl and then blew away NFL officials at the Combine in Indianapolis with his testing. His time of 4.41 in the 40 was the fastest ever for a defensive lineman at the combine. After his mind-blowing Combine showing, it was the thought Sweat would never fall to the Packers at 12 – and he still might not. But he reportedly has a minor heart condition that could give some teams pause. “I think there’s a real chance he’ll be there for the Packers,’’ a veteran NFL scout said last week.

OBSERVATIONS: There are some mixed opinions about whether the Hawkeyes standout will be off the board when the Packers pick at 12 or will slide several spots past them. So, what are the major differences between Hockenson and Fant?

“Fant is a better receiver and faster; Hockenson is a better all-around tight end,’’ the scout said. “They’re both going to be good pros.’’

OBSERVATIONS: Bryan Bulaga has served the Packers well at right offensive tackle for years, but Father Time is catching up with him. Dillard, who played on the left side at Washington State, is athletic enough to switch to the right side. He is arguably the best pass blocker in the draft and would fit in nicely with the Packers’ pass-dominated attack.

NOTES: Started every single game during his stellar career with perennial power Alabama: 29 at left tackle and 15 at right tackle. … Some NFL officials believe his best position might be guard. … Good but not great athlete. …Conscientious and productive: Didn’t allow a sack last season as a junior. … Associated Press All-American first-team choice.

OBSERVATIONS: You could make a convincing case he’s the most fundamentally-sound offensive lineman in the draft and, as a bonus, the most versatile lineman in this year’s quality draft. With the right side of the Packers’ offensive line so suspect, the 6-foot-4, 302-pound Williams would be an instant upgrade.