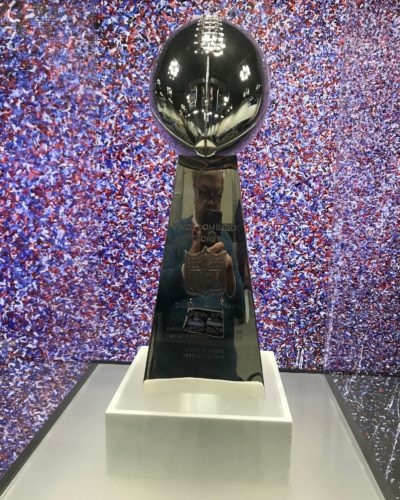 Let me preface what I’m about to say with this one statement: I am not a die-hard Kansas City Chiefs fan.

With that out of the way, something has to be done about the ridiculous overtime rule in the NFL. We saw it firsthand on Sunday when the Chiefs and New England went into OT in their AFC Championship Game. By winning the coin toss, the Patriots got the ball first and drove down for a TD, thus ending the game. The Chiefs did not get a chance to even touch the ball on offense.

This has been the rule for some time now. And it’s now time to change it. It’s time to make sure that each team, especially in the playoffs, get at least one time to have possession.

Think about it: In what other sport does a team that wins a coin toss get to have possession and then can win a game without their opponents even having a chance?

Baseball? Nope. If the game goes into extra innings, both teams get to bat. Think of the outrage if MLB changed the rule and the first team that scored in extra innings would win (that would have to be the road team in this case). Stupid, right? You bet. At least in baseball each team gets an at-bat in extra innings. If the road team scores a run in the top of the 10th, the home team must either score one or two runs or the game is over.

Basketball? No, again. There is a five-minute overtime period in the NBA. Both teams get multiple chances to handle the ball. How about we change the rule and the first team that scores wins the game? Absurd, right? You bet.

Even in the NHL, there is sudden death. But I think it’s pretty rare that a team would win an OT face-off and would immediately score a goal without the other team handling the puck.

Winning a coin toss should never be the factor in a team winning a game in OT, again, especially in the playoffs. Why the NFL would think that this is okay is beyond me. I know in biblical times they would cast lots if an important decision had to be made, but I don’t think the NFL based their OT rule on Old Testament biblical principles. I could be wrong, but I don’t think I am.

As it states right now, the team that wins the coin toss in an NFL overtime game wins if they score a TD. If that team has to punt or commits a turnover, or if they kick a field goal, the other team has a chance to have possession.

For Patrick Mahomes not to get a chance to match Tom Brady’s overtime drive just seemed wrong. Both teams need to get a fair shot. If the NBA, NHL and Major League Baseball can make sure that their overtime (or extra inning format) is fair for both teams, the NFL has to figure out a way to get on par with its fellow professional sports.

Other people are advocating the NFL go to the overtime system used by college football. I’m okay with that as well. At least both teams have the same chance to win.

But the way things are now in the NFL, the way this year’s AFC Championship Game ended (and the way other OT games have ended in past where only one team had possession) has to be changed. There are people a lot smarter than me that should be able to figure out a plausible way to play overtime.

If, however, the NFL comes out and says its overtime policy is based on Old Testament principles and the coin toss must remain in its current form, well, then I guess divine intervention has spoken. I highly doubt that is the case.

We lost out on a possible terrific scenario when Mahomes and the Chiefs did not get a chance to match the Pats. Heck, I would’ve watched another hour of the game if both teams marched up and down the field matching TD in OT. Must-see TV? You betcha.

It may not have lessened the outcry from fans who thought the officiating in both title games was sub-par, but at least we wouldn’t be listening to the ever-present outrage because of a stupid overtime policy.

NFL … The ball is in your court. Or should I say, you have possession. Let’s end this discussion about how unfair the overtime format is once and for all.

Previous: TODAY’S SPORTSTAT: It pays to be offensive in NFL playoffs
Next: The pursuit of Antetokounmpo is well on its way