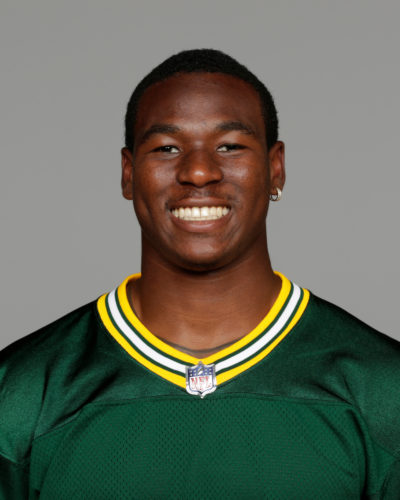 The Green Bay Packers‘ offense has been ailing his season.

Through the first four regular-season games, the Packers’ offense hasn’t come close to clicking on all cylinders. Aaron Rodgers has bravely battled a left knee injury and hasn’t quite performed up to his ultra-high standards; the line has been radically inconsistent and the wide receiving corps has been guilty of too many drops.

Look for all of that to change today.

The Packers play the Lions in Detroit and anyone who follows the green and gold is fully cognizant of the team’s stranglehold on fellow North Division teams and how Rogers has owned them, losing just once in his last nine outings against them.

History aside, the Lions’ defense is hurtin’ in a big way. They rank dead last among the NFL’s 32 teams against the run so you can fully expect the Packers’ emerging three-headed monster of running backs Jamaal Williams (pictured), Aaron Jones and Ty Montgomery (they combined for 110 yards against Buffalo last Sunday) to have another highly productive day.

The Packers are also quite aware that if they win today and then dispatch of the lowly San Francisco 49ers at Lambeau Field next Sunday, they would be 4-1-1 heading into the bye week before playing brutal back-to-back games against the L.A. Rams and New England Patriots – both of which are on the road.

So, while it’s still relatively early in the season, this is too important of a game for the Packers to let slip away.