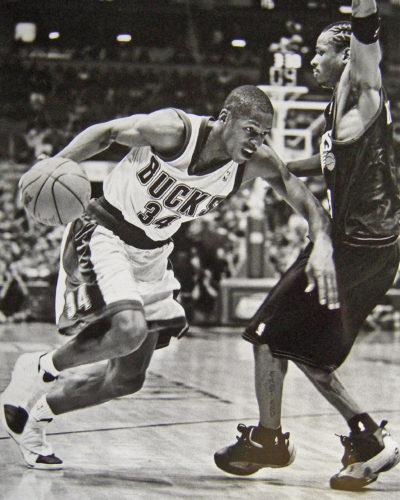 It would be understandable if Ray Allen’s stomach was a wee bit queasy these days.

After all, in a few days — Friday, to be precise — Allen will experience perhaps the most glorious moment of his illustrious basketball career. That’s when Allen will be inducted into the Naismith Memorial Basketball Hall of Fame in Springfield, Mass.

Yet, if you know Allen or had seen him perform, getting nervous over anything isn’t in his DNA. Blood doesn’t run through his veins; ice water does. He is simply impervious to pressure-packed situations.

Members of the 2013 San Antonio Spurs can attest to that. They were in disbelief when Allen delivered one of the most dramatic and clutch shots in NBA playoff history — a game-tying 3-pointer from the right corner in Game 6 of the Finals that enabled the Miami Heat to go on and win the series in seven games.

So, while Allen is delighted about being enshrined into the Hall of Fame, he isn’t jittery, either.

“I’m not really nervous,’’ Allen said during a phone interview. “I’m just excited. It’s kind of like an All-Star Game.’’

Of course, Allen hasn’t had much time to get uptight. He’s been constantly on the go with his business ventures and passion for playing golf whenever and wherever he can. Last week, Allen, a scratch golfer, had the round of his life as he fired a white-hot 63.

The always conscientious Allen did squeeze in some time to work on his Hall of Fame acceptance speech, though. It’s a speech, he concedes, that is posing a daunting challenge for him. That’s because he is one of 13 individuals who’ll be duly recognized for their basketball achievements or contributions. The others are Grant Hill, Jason Kidd, Maurice Cheeks, Steve Nash, Tina Thompson, Charlie Scott, Katie Smith, Dino Radja, Ora Mae Washington, Rod Thorn, Lefty Driesell and Rick Welts.

Because of the large number of inductees, Allen and the other inductees have been instructed to keep their speeches short.

“They are giving us five minutes to speak,’’ Allen said. “But with everything I want to say and all the people I want to thank, it’s easily 17 minutes.

“Now it (his speech) will have to be more generic. It’s going to be a little tougher to do.’’

Allen knows about tough times. His entrance into the NBA was anything but easy for him. After a celebrated collegiate career at Connecticut, he was the fifth overall selection in the 1996 draft, taken by the Minnesota Timberwolves.

But the Timberwolves and Milwaukee Bucks had a pre-arranged trade, a multi-player deal that centered around the 6-foot-5 Allen going to the Bucks for Stephon Marbury, whom the Bucks had drafted with the fourth overall selection.

The several thousand fans who attended a draft night party at the Bradley Center in downtown Milwaukee were delirious when their team chose Marbury. A short time later, though, they became incensed when then Bucks general manager Mike Dunleavy and newly-hired coach Chris Ford informed them of the trade.

“Everybody in the Bradley Center was booing,’’ Allen recalled. “That was hard for me. I felt so unwelcomed.’’

But Allen quickly transformed the jeers to cheers. He won over Bucks Nation with his extraordinary shooting and scoring skills while joining forces with Glenn “Big Dog’’ Robinson and Sam Cassell to form the Bucks’ “Big Three.’’

During the 2000-2001 season, the trio helped the Bucks win their first division title in 15 years and carried them to the Eastern Conference Finals against the Allen Iverson-led Philadelphia 76ers.

It was in Game 6 of that thrilling series Allen had a game for the ages. He scored 41 points in leading the Bucks to a 110-100 victory in Milwaukee. His virtuoso 43-minute performance saw him connect on 9 of 13 shots from beyond the arc and make all eight free throws.

But that wasn’t what made this game so special for Allen. It was a surreal eight-minute span from the middle of the first quarter to early in the second quarter. In that stretch, Allen single-handily widened the Bucks’ lead from 14-11 to 33-15 — by scoring ALL 19 points.

“I remember that game, of course,’’ said Washington Wizards general manager Ernie Grunfeld, whose was the Bucks’ GM at the time. “It was Game 6 against Philadelphia. Ray was en fuego.

“That showed you what kind of player Ray was. Ray was one of the greatest shooters of all time. But he was more than that: He was a tough competitor, a true professional. Ray was everything you look for in a basketball player.

“And he’s a great human being. For him to be chosen to the Hall of Fame is a well-deserved honor.’’

Darvin Ham remembers Allen’s remarkable Game 6 performance, too. But Ham, who was then a teammate of Allen’s, wasn’t the least bit shocked by Allen’s spectacular scoring spree. He had seen that movie before.

“I remember several games where Ray went off; He did that so often that it’s hard to identify which was the best,’’ said Ham, now the lead assistant coach for the Bucks. “He made some big, big shots in his career.

“He was really, really talented. He’s right up there at the top with whomever you name as the game’s greatest shooters ever.’’

Allen’s scintillating Game 6 offensive display was somewhat overlooked by many because of a controversial incident: Scott Williams, the Bucks’ starting power forward and a key contributor to the team’s success that season, was assessed a flagrant foul for elbowing Iverson in the first quarter.

But instead of sticking with the call made by an outstanding officiating crew of Joe Crawford, Jack Nies and Eddie F. Rush-, the NBA, which was led by then commissioner David Stern and NBA senior vice president Stu Jackson, upgraded Williams’ foul to a flagrant 2. By doing so, Williams was automatically suspended for the decisive Game 7 in Philadelphia, which the 76ers won 108-91 to advance to the Finals against the Los Angeles Lakers.

Allen was fined by the NBA for his comments as was Bucks coach George Karl, who also publicly questioned the Williams’ suspension. Now 17 years later, Allen is still upset about Williams not being allowed to play in the pivotal game.

Many Bucks fans were just as disgusted when, in the middle of the 2002-2003 season, the Bucks traded Allen, Kevin Ollie, Ronald Murray and a future first-round pick (Luke Ridnour) to the Seattle SuperSonics for hall of fame point guard Gary Payton and ultra-athletic swingman Desmond Mason.

Allen was jettisoned after enjoying six-plus stellar seasons in Milwaukee, where he averaged 19.6 points and was a three-time All-Star. What’s more, Allen was only 27 at the time and entering the prime of his career.

Allen spent four-plus seasons in Seattle before going on to play with the Boston Celtics and Miami Heat. He was a member of the Celtics’ 2008 title team and the Heat’s 2013 championship team.

While Allen, a 10-time All-Star, saw his hopes of winning an NBA title in Milwaukee come up short, he looks back on his days in Milwaukee with fondness.

“I’d probably still be in Milwaukee today if we had gotten to the Finals that season,’’ said the 43-year-old Allen, who holds NBA records for career 3-pointers in a season and postseason. “It was great to be there early in my career and, over my years in Milwaukee, I learned what good, down-to-earth people lived there.’’