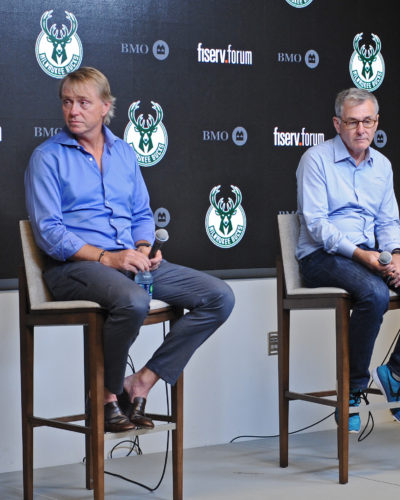 The Milwaukee Bucks weren’t bashful about talking the talk.

They just couldn’t walk the walk.

At this time a year ago, when the Bucks congregated for training camp, coaches and players alike were extremely confident about the 2017-2018 season. Some observers regarded the Bucks’ brash talk to be borderline cocky, especially for a cast that had yet to achieve anything of significance.

After several Bucks had predicted a 50-win season, they went on to win just 44. And then in the first round of the Eastern Conference playoffs, against an undermanned Boston Celtics team that didn’t have its two best players in Kyrie Irving and Gordon Hayward, the Buck came up short again, losing in seven games.

When the Bucks assembled on Monday for Media Day at their spanking new home, the Fiserv Forum in downtown Milwaukee, there was again an ample amount of optimism in the air about this season. But the braggadocio was absent.

Khris Middleton, one of the Bucks leaders and main men, frankly conceded he and the rest of his Bucks colleagues had learned a bitter lesson.

“We were saying 50 wins, 60 wins, whatever,’’ Middleton said of previous season’s predictions. “And it hasn’t happened yet,

“So, to me, and I hate to say this, but we looked like fools in the past, saying we were going to do this and that and we didn’t back up what we said.

“So, the guys are now motivated by those previous years to do it now.’’

Certainly, the Bucks majority owners –Wes Edens, Marc Lasry and Jamie Dinan — hope that is indeed the case. They’ve harbored high expectations for the Bucks from Day One, insisting they were hell-bent on building a championship team.

“Look, last year I was massively depressed when we lost Game 7 (to the Celtics),’’ Lasry said. “I thought it was series we should have won and we didn’t.

“I think everybody wants the same thing. I think we’re in the position to be there and hopefully we’ll get there.’’

Asked where he thinks the Bucks stack up in the East, Lasry said, “You can make an argument that we’re No. 1, 2, 3 or 4. If we stay healthy and if we play to our potential, we’d be one of the top two or three teams. So, I think we’re there.

“It all depends sort of how the other teams do. Does Toronto mesh? Wes and I were talking about Boston earlier and the fact their younger players are going to be playing less whereas last year they played more. Is that going to create issues? There’s a lot of issues. I don’t think we have a lot of issues. I think we’re pretty good.’’

Said Dinan: “I’m obviously biased, but I think we can hold our own with any team in the East. I think, quite frankly, under coach Bud (Mike Budenholzer), as these players mature and develop, we’ll be good. I’m real optimistic.’’

With the Eastern Conference seemingly wide open now that LeBron James has left Cleveland for the Lakers in Los Angeles, with the Bucks moving into their new arena, with Middleton, Malcolm Brogdon and Eric Bledsoe possibly moving on after this season in free agency, there is a growing sense of urgency permeating throughout the organization for the Bucks to have a special season.

“I think there’s pressure every year,’’ Middleton said. “But we feel like this is our chance now. We have gone through everything: We have gone through a 15-win season, we’ve gone through losing in the first round, to not making the playoffs, a coaching change in the middle of the season, so now we should be prepared and battle ready to take that step.’’