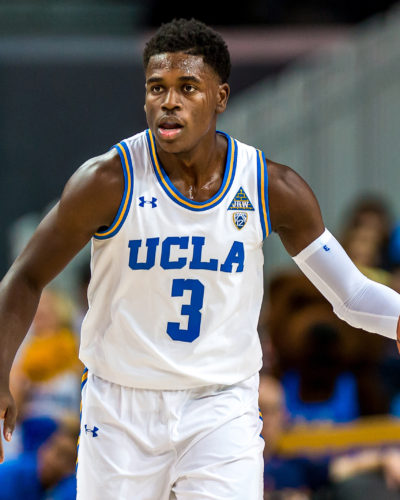 There are already two Holidays in the NBA.

Next season, there’ll be a third.

Aaron Holiday, whose older brothers Jrue and Justin are established NBA players with New Orleans and Chicago, respectively, is a slam dunk to be one some NBA roster next season. A talented all-around point guard, Holiday is a projected first-round pick in the June 21 draft and could even be selected in the teens, possibly by Milwaukee, which has the 17th overall selection.

“Jrue always said that Aaron was going to be the best of all of the Holidays,’’ said a veteran NBA scout. “I don’t know about that, but he’s a very good player.

“He’s tough, he can defend and he has supreme confidence. Actually, he plays the game like Jrue. He has the same mannerisms on the court like Jrue.’’

Indeed, Holiday has game. He is coming off a stellar junior season at UCLA, where he averaged 20.3 points and 5.8 assists. He also vividly showed he can shoot the 3-ball — something that is essential in today’s NBA – by connecting on 43 percent of his treys last season.

The only concern, although it appears to be a minor one, is that Holiday, is undersized. He was measured at 5-11¾ inches without shoes at the recent NBA Combine in Chicago.

An Eastern Conference player evaluator contends the Bucks, who interviewed Holiday at the Combine, will seriously consider drafting Holiday with their top pick. The same official said he felt Holiday is every bit the equal of Shai Gilgeous-Alexander of Kentucky, who is projected as a late lottery to mid-first round pick primarily because of his upside.

“He’s a little guard, but I’m a pretty fan of his,’’ a Western Conference scout said of Holiday. “He does a lot of things really well.’’

By the way, the last three brothers to play in the NBA at the same time were Brent Barry, Jon Barry and Drew Barry. They all played in the NBA from 1997-2000.

One of the draft prospects the Bucks will work out on Friday in Milwaukee is Donte Ingram, a 6-6 forward who played a major role in Loyola-Chicago’s stunning run to the NCAA Final Four.

Ingram also played his prep ball at Simeon in Chicago, where he was a teammate of Bucks forward Jabari Parker.

This will mark the second time Ingram has worked out for the Bucks after having had an individual workout about two weeks ago. He and his agent, Keith Kreiter, have scheduled a private workout in about two weeks for several teams, with the New York Knicks and Miami Heat among them.

Another player from an Illinois college who will work out for the Bucks on Friday is Eugene German, an exciting point guard from Northern Illinois, who is deciding to remain in the draft. German also worked out for the Bulls on Thursday.

Antetokounmpo by the numbers

Antekounmpo also was measured at 6-9 without shoes — fifth tallest forward – and weighed 194.8 pounds, which was the second lightest among forwards.

Antetokounmpo, who played at Dayton last season, is regarded as a potential late second-round choice, although some scouts contend he would be better served by playing professionally for a while overseas.

“He has a ways to go to play in the NBA,’’ an NBA executive, who attended the NBA Combine, said. “He’s doesn’t have one skill that stands out yet and his body is really thin. I think the only way he gets drafted is because of his upside. I would suggest he go to Europe and then come back after a year or two.’’

Nobody seemingly helped himself more at the NBA Combine than Villanova shooting guard Donte DiVincenzo. He is now considered a legit pick in the latter third of the first round. … Matur Maker, the younger brother of Bucks center Thon Maker, will work out for the L.A. Lakers on Friday and then the Cleveland Cavaliers two days later. Maker is expected to work out for the Bucks, although a date hasn’t been established. … Texas Tech shooting guard Zhaire Smith, according to an NBA player personnel director, could go anywhere from 15 to 25. Smith, whom the Bucks interviewed at the Combine, has a chance to enhance his stock during a pro day set for May 30 in Los Angeles. Said a longtime Western Conference scout about Smith, who turns just 19 on June 4. “He is a phenomenal athlete, but it’s all about upside with him.’’

— Photo is courtesy of UCLA Athletics