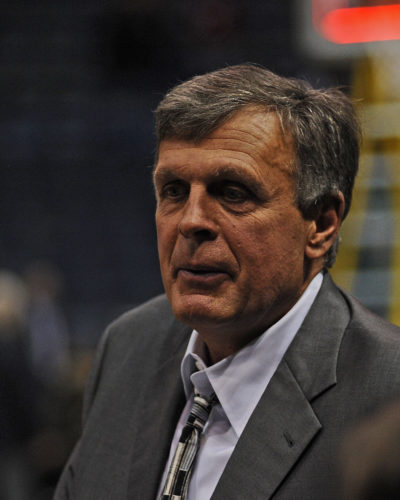 Kevin McHale has virtually seen and done it all.

McHale was a hall of fame player for Boston Celtics, was a head coach for the Minnesota Timberwolves and Houston Rockets and vice president of basketball operations for the Timberwolves.

These days, McHale is working as a television commentator and is generally regarded as one of the most candid and fair announcers in the business. Whether the 61-year-old McHale remains in the broadcasting business remains unsure, though.

There have been rumors for more than a month now that McHale is exploring the possibility of returning to the NBA as either a head coach or front office official. Sources have told me he has shown interest in the Bucks, who some NBA officials contend will be hiring a president of basketball operations and possibly head coach, depending how the Bucks fare in the playoffs. The Bucks play the Celtics Saturday night in the seventh and decisive Game 7 of their Eastern Conference first-round series.

When I queried McHale after Game 6 in Milwaukee on Friday night about whether he was interested in returning as a head coach or GM, he responded, “I’m interested in the next game.’’

Seconds later, McHale, who was in the process of leaving the Bradley Center, added, “We’ll see. You never say never.’’

Asked if the Bucks had let it be known to him that they are interested in his services, as some NBA officials claim, McHale didn’t respond and walked away.

McHale coached Minnesota for parts of two seasons and Houston for four-plus seasons before being relieved of his duties with the Rockets after going 4-7 in 2015.

His career regular-season coaching record is 232-185. He guided the Rockets into the playoffs three straight seasons, starting with the 2012-2013 season and posted a career playoff coaching record of 13-16.

Besides being linked to the Bucks, McHale’s name has been rumored as a candidate for the vacant Phoenix Suns head coaching position.

It appears the Bucks will once again be without John Henson for Game 7.

Henson hurt his back in Game 2 and the Bucks’ starting center hasn’t played since. Henson said his back “locked up’’ in the second game of the series and played through the excruciating pain.

Bucks starting guard Eric Bledsoe is expected to start Game 7, but he’s far from being 100 percent healthy. He injured his left hand in Game 4 and has since played with the hand in a wrap.

After first saying the injury didn’t bother him, Bledsoe conceded before Game 6 that it had bothered him on occasion. Bledsoe went 5 for 15 from the field in Game 5 and was 3 of 10 in Game 6. He is shooting just 38 percent from the field and 30 percent on 3s in the series.

Bucks forward Jabari Parker and Celtics forward Jayson Tatum have a good rapport, both having played at Duke but not at the same time.

Tatum, who is enjoying an outstanding rookie season, said Parker played a major role in his decision to attend Duke.

“I love Jabari; we’ve become good friends,’’ Tatum said. “He was someone I really looked up to when I was young. When I was in high school, I really liked his game a lot. He’s one of the biggest reasons why I went to Duke.’’

Asked about his strong showing, Parker simply said, “I’m a team player. I’m not perfect, but my intentions are right. I just want to win.’’

Jeff Twiss, the Celtics’ venerable vice president of media services, is enjoying his 37th season with the team and doesn’t have any plans of quitting any time soon. … To those who think Giannis Antetokounmpo needs to fire up a ton of shots in order for the Bucks to win Game 7, consider this: In Games 1 and 2, he took 21 and 17, respectively, and the Bucks lost both games. In Game 3, he took just 13 shots and the Bucks prevailed. … The winners of the Bucks-76ers series will play Philadelphia in the second round.