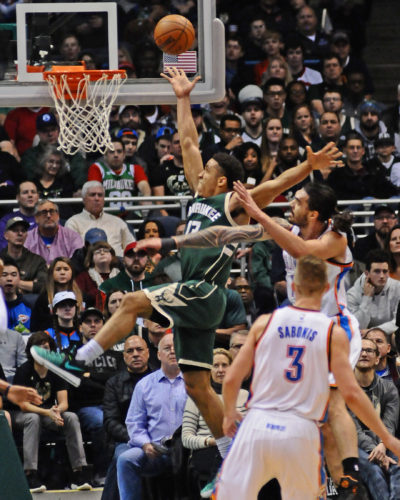 It’s hardly surprising the Milwaukee Bucks are being prominently mentioned in trade talks for Eric Bledsoe. After all, the Bucks have had their eyes on the veteran guard for the last several years.

But never has the timing been more impeccable for the Bucks to acquire the talented combo guard than now, especially since the Suns and Bledsoe have made it abundantly clear they want to terminate their relationship.

The Bucks, like a slew of other teams, are enamored with Bledsoe’s scoring capabilities. With Jabari Parker expected to be sidelined until probably February, the Bucks are in need of an explosive scorer to complement Giannis Antetokounmpo and Khris Middleton.

The $64,000 question is: What are the Bucks willing to surrender as compensation for Bledsoe? According to several NBA sources, it would likely be a combination of players with reigning Rookie of the Year Malcolm Brogdon being the major one.

Brogdon perfectly fits the mold of the player the Suns are seeking in a trade for Bledsoe: a relatively young starting guard –Brogdon is 24 and turns 25 on Dec. 11 – to team with gifted shooting guard Devin Booker.

But sources claim the Bucks are somewhat reluctant to trade Brogdon, whose all-around game, unselfishness and maturity have meshed nicely with Antetokounmpo and Middleton.

The scuttlebutt is, if the Suns got their way, they’d acquire Brogdon and either veteran big man John Henson or former Suns forward Mirza Teletovic.

Brogdon is being paid $1.3 million this season, while Henson and Teletovic are on the books this season for $11.4M and $10.5M, respectively. Bledsoe will collect $14.5M this season, with his salary jumping to $15M next season.

But sources said the Bucks are, at least for now, dangling veteran guard Matthew Dellavedova, who started 54 games last season and averaged 7.6 points and 4.7 assists, instead of Brogdon. The Suns are balking and appear adamant on wanting Brogdon.

Brogdon has picked up where he left off last season, and perhaps playing even better, but several NBA officials said they still have question whether he can remain healthy.

Brogdon underwent foot surgery while playing at the University of Virginia and, while he had a stellar career, serious concerns about his foot prompted several NBA teams to downgrade him from a first-round selection to a second-rounder, where the Bucks selected him. Some teams were so worried about Brogdon’s foot that they took him completely off their draft boards.

While Brogdon played in all but four regular-season games last season and Bucks officials publicly insist they are comfortable with Brogdon’s foot situation, two individuals close to the team said Bucks coach Jason Kidd closely monitored Brogdon’s minutes last season and that the team is deeply concerned about potential problems.

Brogdon is one of several young point guards the Suns appear to be interested in acquiring. The Suns are also intrigued by 21-year-old Emmanuel Mudiay, whom the Denver Nuggets made the seventh overall selection in the 2015 draft and is currently backing up Jamal Murray.

The Nuggets and Bucks, according to two NBA officials, are regarded as the leaders in the Bledsoe Sweepstakes, although those same sources said a spate of other teams, including playoff-caliber ones like the Los Angeles Clippers, Boston and Miami, have internally tossed around the idea of acquiring Bledsoe.