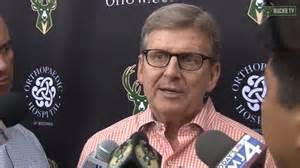 Whenever an NBA executive moves from one team to another, it isn’t unusual for that individual to take along several of his co-workers

But, barring something unforeseen, don’t expect that to be the case with John Hammond, who recently left the Milwaukee Bucks as their general manager for a similar position with the Orlando Magic.

While Hammond spent nine seasons with the Bucks, only one person from that organization is expected to join him in Orlando.

League sources said the Bucks’ hierarchy was originally reluctant to allow Horst to go with Hammond but have since back off to the point where it’s only a matter of time before his departure, sources said.

There was ample speculation Billy McKinney, another longtime co-worker and close friend of Hammond’s, was going to bolt to Orlando as well.

But McKinney, the Bucks’ vice president of scouting who has known Hammond since their childhood days in Zion, Ill., apparently doesn’t have any intentions of joining Hammond in Orlando at this point.

Dave Babcock, the Bucks’ vice president of player personnel, is also expected to remain with the Bucks.

There are indications Bucks officials will move quickly in making their decision, especially with the draft set for June 22.

The Bucks have the 17th overall pick in the June 22 draft, but two players who are expected to be chosen in the middle of the first round aren’t scheduled to work out for the team.

They are sharp-shooting guard Luke Kennard of Duke and Duke center Harry Giles, who is highly skilled but has been beset by knee issues.

This isn’t the first time Karnisovas has been contacted by the Bucks about a spot in their organization. Then Bucks general manager Larry Harris, now an executive with the Golden State Warriors, had interest in hiring Karnisovas as a scout just over a decade ago.

Previous: Tapp-ing into the Numbers: The 600-HR Club welcomes Albert Pujols
Next: Bucks center their attention on big men