The NBA draft is fast approaching. June 23rd to be precise.

And that’s got to be a wonderful thing for NBA general managers, player personal directors and scouts, who have invested untold hours into separating the wheat from the chaff.

By all accounts, this draft appears rather unique with no certifiable franchise-changer, someone who can be truly impactful right away.

“It’s a very mediocre draft,’’ an NBA executive said. “It’s not as good as last year’s draft or the draft the year before, that’s for sure.’’

At this time a year ago, there was a heated debate whether Jahlil Okafor or Karl-Anthony Towns would be the No. 1 overall selection. When the draft rolled around, Towns went No. 1 to the Minnesota Timberwolves and Okafor went No. 3 to Philadelphia. The second pick turned out to be D’Angelo Russell, taken by the Los Angeles Lakers.

This year’s draft begs the same question: Who’ll go No 1?

And, like last year at this time, it’s appears to be strictly a two-player race between Ben Simmons, an exceptionally-talented, versatile player from Louisiana State University, and Brandon Ingram, an offensively gifted forward from North Carolina.

The 6-foot-10 Simmons can virtually play anywhere on the floor, including point guard. In the eyes of most NBA officials, Simmons is The Man of the 2016 draft class

But Ingram definitely has his supporters, including one longtime NBA scout who claims “Ingram could be better than George Gervin.’’ The “Ice Man’’, as we all know, is in the Hall of Fame.

“I like Brandon Ingram,’’ a scout said. “He’s not ready (for the NBA) to be an impact player right away, but he’s got great offensive tools. He’s got a chance to be very good eventually.’’

While Simmons and Ingram are the consensus Nos. 1 and 2 picks, don’t sleep on Jamal Murray, a combo guard from Kentucky, or Providence point guard Kris Dunn. They could be drafted quickly, depending on a team’s draft needs.

“He’s not Russell Westbrook, but he’s got some things in his game that are similar to Westbrook’s,’’ the scout said of Murray.

Dunn is seemingly the prototypical NBA point guard and will undoubtedly get a long hard look from the Philadelphia 76ers, if they can acquire another top pick to go with their No. 1 pick (How about Okafor to Boston for the No. 3 overall pick?). The Sixers have glaring need for a point guard and some sources told me they are infatuated with Dunn.

Dunn has ideal size at 6-foot-4 and brings it at both ends of the floor. One scout compared him to Milwaukee Bucks guard Michael Carter-Williams – with a much better jump shot.

“I’d have to go with Kris Dunn if our team had the second pick,’’ said a veteran scout, whose team doesn’t have that pick. “You know what you have with him. You know he’s going to be good in our league.’’

There are a few other intriguing prospects who have the skill sets and upside to be top-six selections as well, including 7-foot Dragan Bender, Oklahoma shooting guard Buddy Hield and Marquette forward/center Henry Ellenson.

Suffice to say, team workouts between now and the draft will be critical for many players. 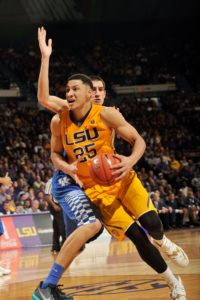 Previous: Look For The Packers To Ace The Biggest Test Of The Season
Next: NBA Scouting Director: Poeltl is a Top 6 Pick