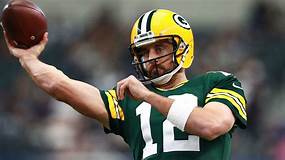 So, which Aaron Rodgers is going to show up today?

Will it be the Rodgers who was extraordinarily good two weeks ago against the Super Bowl contending Kansas City Chiefs in recording a 129 passer rating?

Or will it be the Rodgers who was stunningly mediocre, especially in the first half, against the struggling Los Angeles Chargers in recording an 85.5 passer rating?

Of course, Packer Nation hopes Rodgers reverts to his former form, although. Rodgers won’t have to be as amazing today against the Carolina Panthers at Lambeau Field.

But Packers can ill afford Rodgers having another clunker, especially considering Carolina is a quality team: They are 5-3 and have acquitted themselves well on the road. They have won three of their four games played in hostile settings, a mark that is surpassed by only two other NFC teams: San Francisco (5-0) and Seattle (4-0).

The Panthers also have game-changing players on both sides of the ball: On offense, it’s Christian McCaffrey, a certifiable MVP candidate. McCaffrey, just 23, may be one of the most complete backs the game has ever seen. He is equally adept as a rusher and receiver. This season, he’s rushed for 881 yards – the second most in the league – and 10 touchdowns and caught 34 passes with three touchdowns.

On defense, Panthers have arguably the best linebacker in the business in Luke Kuechly, who can stuff runners at the line of scrimmage and cover them like a wet blanket in coverage.

But as good as Kuechly is, it would be a grave mistake for the Packers to sleep on Mario Addison. The outside linebacker/defensive end has emerged as one of the premier pass rushers in the league. After laboring in anonymity for his five pro seasons, Addison has recorded at least nine sacks in each of the last three. This season, he has registered 6.5 sacks.

The bottom line: Rodgers has to play up to his capabilities, and the Packers have to keep McCaffrey and Addison in check for Green Bay to up its record to 8-2 heading into their bye week.

Previous: Zielinski: Packers will bounce back today against Panthers
Next: Packers are one of only three teams to already surpass last season’s win total