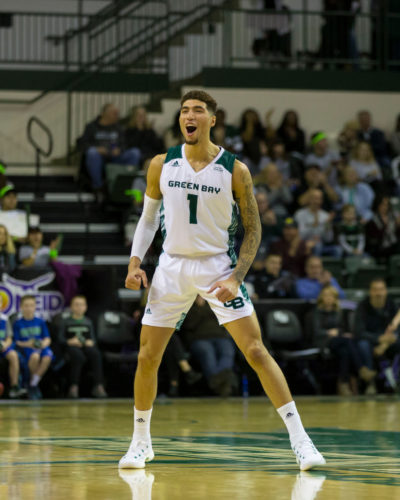 He doesn’t boast about his exploits and seems to maintain an even-keel disposition.

That, however, shouldn’t be misconstrued for having a lack of confidence, especially when it comes to playing basketball. Cohen, the former UW-Green Bay star, isn’t afraid to challenge anyone on the court. He believes strongly in his abilities even though some observers might not.

Take, for instance, his future in the game. The versatile 6-foot-6 Cohen won’t be found on anyone’s NBA two-round mock draft with all indications point toward him being bypassed in the June 20 draft.

Yet, even if Cohen isn’t selected on draft night, he isn’t going to be overly distraught or recalibrate his opinions on his basketball skills. In Cohen’s mind, and others, he’ll be playing for pay next season.

“Oh, absolutely, I feel like I’ll be playing at the pro level next year,’’ Cohen said quietly but convincingly. “Whether it’s in the NBA, G League or overseas, I expect to be playing professionally. One of those three. I’ll be playing somewhere.’’

Cohen’s resume provides him hope of having a bright future in the game. After being a hot-shot player at Seymour (Wis.) High School, Cohen chose to attend Marquette University, where he immediately started as a freshman.

But after 2½ seasons at Marquette, Cohen decided to transfer to Green Bay. He exhibited steady improvement with the Phoenix to the point where he led the Phoenix in scoring at 17.5 points and rebounding at 6.4 a game last season.

His decision to move on from Marquette, Cohen said, was tough but the correct one.

“I left Marquette just so I could develop my game a little more and have a bigger role,’’ Cohen said. “I just wanted to perfect my game. I wanted to get more chances to play on the on the ball and do more things.

“I learned a lot at Marquette, that the ups and downs are part of the game. But I wouldn’t change my decision for the world. It got me to where I am today.’’

It’s put Cohen in position where he can realistically extend his dream of playing in the NBA, a dream he’s had since he was a child. Cohen, whose father, Sandy, is African-American, and whose mother, Linda King, is Native American, showcased his skills before a large contingent of NBA and European scouts two months ago at the Portsmouth Invitational Tournament in Portsmouth, Va.

Cohen, who performed solidly at the PIT, spoke with representatives of several NBA teams, including the Milwaukee Bucks, Indiana Pacers, Miami Heat and Philadelphia 76ers.

Cohen, whose agent is David Hamilton of Next Sports in Atlanta, has been training religiously either in Indianapolis or Green Bay. He participated in a pro day on Saturday in Dallas that featured projected lottery pick Sekou Doumbouya of Guinea.

Cohen then worked out for the Cleveland Cavaliers on Tuesday and has a scheduled workout with Indiana officials on Thursday. The Bucks have also expressed an interest in bringing him to Milwaukee for a workout.

Following the draft, Cohen is looking to land a spot on an NBA summer league team and perhaps secure a “two-way’’ deal with an NBA team.

“Oh, yeah,’’ Ekstrand responded when asked whether pro ball was Cohen’s future. “The thing about him is that he’s got a good understanding of the game, he’s got size and he can basically play the one, two and three positions and make plays. I had seen him play for Green Bay and he can make plays for others. And he can create a shot for himself.

“He’s a guy, who I think with some work, will improve his long distance game. When guys leave school and don’t have to go to classes anymore and can spend extra time in the gym, their shooting improves. The more of the long-ball threat he becomes, all of the other stuff he does will get better, too.

“He was able to get a lot done at a good level of college completion at Green Bay. With his size and physique and skill level, he’ll get a shot for sure.’’