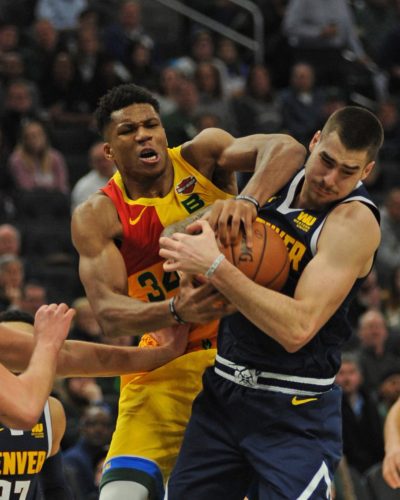 Home » Guest Post » Youth is served with Antetokounmpo in playoffs

In a superlative-filled season, Giannis Antetokounmpo continues leading the Bucks closer to a chance to win an NBA title. The Bucks will be making their first appearance in a conference final since 2001 and hope to get their first Finals appearance since losing to the Boston Celtics in 1974.

One thing we might forget about Giannis is that even though he is playing in his sixth NBA season, he is still not yet 25 years of age. He will not turn 25 until December.

With that in mind, it’s interesting to note that Giannis earlier in the playoffs became the third Bucks player under the age of 25 to score 40 or more points in a playoff game. He scored 41 in a first round game against the Detroit Pistons on April 22.

So far in his career, Giannis has had three playoff games where he scored 35 or more points. That makes him one of only 30 NBA players in history to score 35 or more points in three or more playoff games before the age of 25. (He will certainly have a chance to add to that total as the Bucks play in the Eastern Conference Final and perhaps beyond this year.)

LeBron James has the most career NBA playoff games with 35+ points before the age of 25 with 15. He is followed by Kevin Durant with 12, Kobe Bryant with 11 and Bob McAdoo with 10. Giannis is one of nine players tied with three games each.

Michael Jordan tops the league with the most points scored in a playoff game before the age of 25 with 63. He is followed by Rick Barry (55), Wilt Chamberlain (53), and Vince Carter, Chamberlain, Bob Cousy and Bob McAdoo with 50 points each.

The youngest player to score 35 or more points in a playoff game is Derrick Rose. He was 20 years-196 days when he in 2009 scored 36 in an Eastern Conference first round contest. Magic Johnson is second on this list; he was 20 years-276 days when he scored 42 in Game Six of the 1980 NBA Finals against Philadelphia.

Previous: Happ looks to give it his best shot
Next: Today’s Sportstat: You could always count on Robin Yount to give you that little ‘extra’