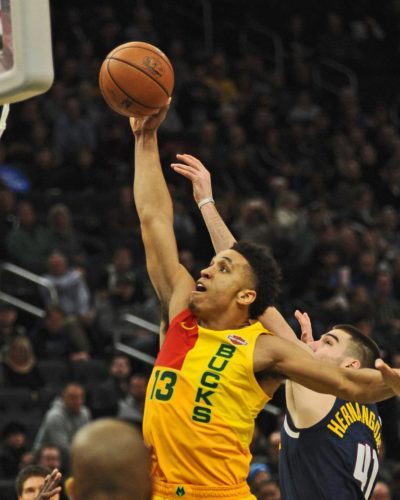 There’s no question the Milwaukee Bucks could use the services of Malcolm Brogdon in the playoffs.

There’s also no question Brogdon would be served well by playing in them.

Brogdon, the Bucks’ talented all-around guard, is sidelined with what Bucks officials said was a foot injury. At the time of the injury the Bucks said in a press release that Brogdon had suffered a “minor plantar fascia tear in his right foot.’’

Brogdon has now been sidelined for TWO MONTHS. When he’ll return to action remains questionable, although Bucks officials claim it could be soon. He won’t play in the Bucks’ next game on Friday night in Boston with the Eastern Conference second-round best-of-seven game playoff series tied at one game apiece.

Getting Brogdon back on the court would certainly be a boon for the Bucks. He enjoyed a terrific regular season, averaging 15.6 points and 4.5 rebounds.

Brogdon also shot the ball extremely well during the season, connecting on 50 percent of his field-goal attempts and was .426 from 3-point range and 92.8 percent from the line.

Brogdon’s value to the Bucks goes beyond the numbers, though. He is the team’s steadiest and savviest player and has an uncanny knack for making a key play.

But as much as the Bucks would benefit having Brogdon back in uniform, several NBA officials claim it’s equally important for Brogdon to show he’s healthy heading into this summer’s free agency period.

Brogdon has a well-chronicled history of foot issues. He underwent surgery on his left foot while attending Virginia and, when he entered the 2016 draft, a slew of NBA teams “red-flagged’’ him and took him off their draft boards.

The Bucks nevertheless selected Brogdon in the second round of the ’16 draft, the 36th overall pick, and it proved to be a colossal steal. The 6-foot-5 Brogdon went on to earn Rookie of the Year honors.

But Brogdon played only 48 games in his second season with the Bucks and just 64 this season as he’s been plagued by injuries. And that hasn’t gone unnoticed by the rest of the league, especially some teams that are seriously contemplating signing Brogdon to a free-agent contract. Brogdon will become a restricted free agent on July 1. The Bucks can match any offer presented to Brogdon by another team.

“I’ll be honest with you; we’re still concerned about his foot problem like we did when he came out in the draft,’’ an NBA executive said earlier this week. “I want to see how he does in the playoffs. I think he needs to play in the playoffs to show teams he’s fine. That’s going to tell what kind of deal he gets this summer.’’

If Brogdon proves he can play in a high level in the playoffs and is healthy, he could be in store for a huge pay increase. Brogdon earned a paltry $1.54 million this season.

Another NBA official, whose team has Brogdon on its free-agency radar, contends if Brogdon is productive in the playoffs and proves his feet are fine, he will then become a coveted free agent.

“There are several teams that need a quality guard,’’ the official said of the 26-year-old Brogdon. “I would say he’ll get between $14 million to $16 million. That would be my guess.’’

While that would be a substantial raise for Brogdon, it would still put him behind Bucks starting point guard Eric Bledsoe in annual salary. Late in the regular season Bledsoe signed what some league officials considered a subpar contract, one that will pay him $70 million over the next four seasons – or $17.5 million per season.

There are some NBA officials who contend Brogdon is as good or even better, than Bledsoe.

“Bledsoe is a better all-around player,’’ an Eastern Conference official said. “Brogdon is more of a winning player. From a salary standpoint, I don’t see much difference between them.’’

Considering there are a bunch of teams with oodles of cash at their disposal this summer for free agents, a guard like Brogdon, who can play the point or off the ball, will be quite appealing.

Said another Eastern Conference official: “I would like to have him (Brogdon) on our team. I’m sure there are a lot of other teams that would like him, too. Don’t tell me teams like Phoenix and Orlando wouldn’t really want him.’’

Indeed, Brogdon could receive keen interest during free agency with the league cognizant of the Bucks being in salary cap hell. It’s a foregone conclusion the Bucks will lose at least two, if not three, of their top nine players or face a hefty luxury tax penalty.

Sources said some teams are already plotting ways to sign Brogdon to a “front-loaded’’ deal, knowing full well the Bucks would have an extreme difficult time matching it.

“The Bucks are in trouble; they got big, big salary-cap problems,’’ a front office official said. “They haven’t done a good job managing their budget.

“They can’t keep everybody; they know that. If you ask me, Brogdon will be one of the guys that gets away from them.’’