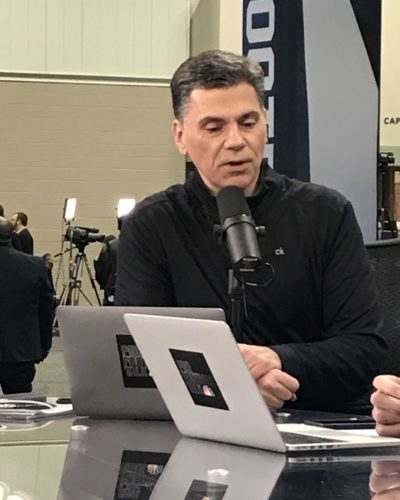 Home » Gery's Blog » Uncategorized » Mike Florio: ‘He (LaFleur) is going to have to grow into this job quickly or he’s going to get devoured by that locker room.’

INDIANAPOLIS — When it comes to covering the NFL, Mike Florio is a shutdown reporter, one of the best in the business.

Florio, who writes for Profootballtalk.com and is a key contributor on NBC’s coverage of Sunday night NFL games, has a proven track record for breaking stories. And he isn’t afraid to express his opinion.

Florio is also smart. Real smart. He has two engineering degrees from Carnegie Mellon and a law degree from West Virginia University

I caught up with the 53-year-old Florio at the NFL Combine and queried him on an array of Packers’ topics, including his take on the hiring of Matt LaFleur as the Packer new head coach.

Were you surprised the Packers fired Mike McCarthy – even though there were still four games left in the regular season?

MF: “I wasn’t surprised because I felt like it had been overdue and because I feel the team had underachieved. The Packers organization has been slowly waking up to what needs to be done to get the most out of the remainder of Aaron Rodgers’ career. I wasn’t surprised by the timing because it allowed them to start the process of thinking, looking, exploring, searching. It gave them a head start. Once they know they’re going to make the change, go ahead and make the change. Move on. It gave them a chance to evaluate Joe Philbin as a possible candidate. It gave them a chance to do all the work they needed to do. I think it made sense. If anything, it was overdue. I said before, the fact the Packers don’t have a traditional owner probably bought more time for McCarthy than he should have had.’’

Do you see McCarthy bouncing back and landing an NFL head coaching job?

MF: “I don’t know. I’m surprised with seven other coaching jobs open this year that there wasn’t a rush to get him. When the Browns don’t want him, and there’s so many guys in Cleveland who had been in Green Bay, I think that’s a warning sign. Look, the passage of time, and his opportunity to lay a foundation, almost like what Lovie Smith did after he was fired by the Bears — he took a year off and really planted his next move — that may help McCarthy. But I think it’s going to be an uphill climb because we have seen many guys in his age group who get fired and the world just moves on without them because teams are looking for younger guys, they’re looking for fresher ideas. It kind of got stale for McCarthy in Green Bay. He’s got to shed that reputation if he wants to get back in.’’

The Packers, of course, replaced McCarthy with Matt LaFleur. What’s your perception of LaFleur?

MF: “He’s a nice guy and I think he has the opportunity to be a good coach. I want to see a little more from him that would suggest he’s going to be able to command a room. I worry about him walking into that room with 90 guys in April and really taking over the way he needs to. He seems almost sheepish, and I mean that respectfully. But he seems like he’s not ready to take over the room. And throw the Aaron Rodgers’ dynamic on top of it. Will he be too deferential to Aaron? Is he expected to be deferential to Aaron? There are some who think Matt LaFleur was hired because they wanted a guy who would basically let Aaron ultimately run the show, or at least think Aaron is running the show. It’s going to be a challenge over the next year or two to get everything properly ensconced in Green Bay. I think LaFleur has potential; he’s a young guy. He’s going to have to grow into this job quickly or he’s going to get devoured by that locker room.’’

On the gamble scale, how huge of a gamble was it for Packers president Mark Murphy to hire LaFleur, who is 39 and has never been a head coach before?

MF: “It’s definitely a gamble. Any time you take a guy who has never been a head coach before and you assume based upon the work he’s done that that projects to being a great coach, you’re running the risk that you’re getting a guy who just isn’t. Sometimes it works, sometimes it doesn’t. I thought the Packers were in a great position to go out and hire somebody who would really relish the opportunity to work with Aaron Rodgers, but they didn’t go that route. And they explored some guys with experience. I thought Jim Caldwell would have been great for Aaron Rodgers, but it wasn’t mean to be. I thought Adam Gase would have potentially been very good with Aaron Rodgers, a couple of guys with chips on their shoulders. I think Gase would have known how to press Aaron’s buttons and get the most out of him. But they made a decision to hire LaFleur who I assume, barring a disaster, will be in Green Bay for the rest of Rodgers’ career and presumably beyond that.’’

Patriots offensive coordinator Josh McDaniels was interviewed for the Packers head coaching job and there was wide-spread speculation that he would eventually land the job. Do you have any insight as to what went down on the McDaniels’ front?

MF: “I just don’t if there are people around the league who still have a problem, a real problem, with what McDaniels did last year leaving the Colts at the altar. I think that’s one of the reasons why I believe the Browns didn’t take a serious run at him. There’s a good relationship between John Dorsey, the GM of Cleveland, and Chris Ballard, the GM of the Colts. And Ballard was the guy who got left at the altar by McDaniels. So, I think that may be part of it.

“But it might not necessarily be McDaniels; it’s this fear that you’ll never get this guy out of New England. Look at what the Dolphins did with Brian Flores. There wasn’t even anything left to chance. They took him to Miami and didn’t let him go back to New England (where he had been the Patriots linebackers coach the last three seasons). You never know because the Patriots will put the hard sell on you and they got McDaniels to change his mind once, so that’s part of the concern. We want to announce this guy now; we don’t want to wait any longer. And I think there also would be a concern that just because McDaniels’ style worked with Tom Brady, it wouldn’t work with Aaron Rodgers.’’

MF: “I think he would have been interesting in Cleveland because he really likes Baker Mayfield. But for whatever reason, Dorsey wasn’t interested. McDaniels wasn’t interested in the Cincinnati job but the Packers job he was. He wouldn’t have taken that interview if he wasn’t serious about it. And I think he was serious about it because before the Packers hired Matt LaFleur, just a couple of days before that, I was told the Patriots were prepared for the reality that this was the year he (McDaniels) was going to leave.’’

Going forward, what do you consider the Packers’ biggest need?

MF: “I’d love to see them get a running back who is a big-time, every down running back. They’ve never really ever had that. They thought they had that with Eddie Lacy. I don’t know if they have the money to move into the Le’Veon Bell sweepstakes, but that would be an exciting move for them to make. And I think with (Packers GM) Brian Gutekunst, there’s more of a desire and interest in doing what needs to be done in free agency.’’

What’s the odds of veteran linebacker Clay Matthews returning to the Packers?

The odds of veteran wide receiver Randall Cobb staying with the Packers?

Lastly, do you envision the Packers bouncing back and being an NFC North Division title contender and viable, upper-echelon team again?

Previous: Could Badgers’ celebrated offensive line been even better?
Next: TODAY’S SPORTSTAT: Bucks, Budenholzer hone in on 60-win season