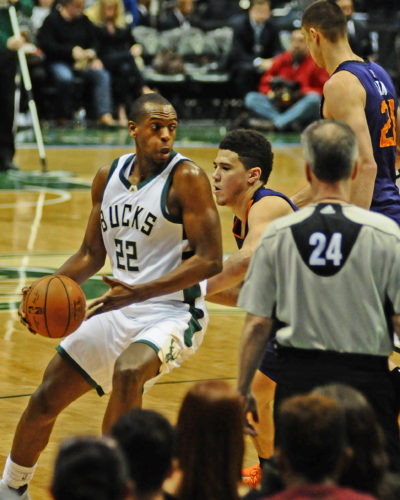 The Bucks veteran swingman then proceeded to spend the next 10 minutes or so unleashing a barrage of shots from beyond the arc. That wasn’t by accident.

Middleton is unquestionably the team’s best perimeter shooter and how he performs could make or break the Bucks’ 2017-2018 season, which commences on Wednesday night against the Celtics in Boston.

While Giannis Antetokounmpo has clearly established himself as the Bucks’ version of Batman, he’ll desperately need a wing man if the Bucks hope to move from being a run-of-the-mill team to an elite one in the Eastern Conference.

Middleton, plain and simple, has to elevate his game to another level – especially with Jabari Parker probably out until February – and provide the Bucks with consistent long-range threat.

The Bucks noticeably lacked a perimeter game last season. They attempted a mere 23 treys a game, with Bucks coach Jason Kidd seemingly obsessed with his team playing inside-outside rather than outside-inside like most of the highly successful teams i.e. Golden State, Cleveland and Houston.

Middleton shot the 3-ball exceptionally well last season — at a 43 percent clip in 29 regular-season games — but he also took a meager 3.6 treys a game.

I asked Middleton if he would crank up that average this season.

“So, if the opportunity presents itself, then I’m going to do it.’’

When I asked him if Kidd has encouraged him during training camp to shoot more 3s this season, Middleton’s response didn’t seem to indicate that was the case.

“I just want to play the right way within the offense and not try to do everything myself.’’

After Middleton came back from his serious hamstring injury late last season, he acquitted himself well, averaging 14.7 points while shooting 43 percent from 3-point range and 45 percent from the field.

However, in the playoffs, it was amply apparent Middleton wasn’t himself. In the opening-round series against Toronto, Middleton shot a subpar 39 percent from the field, 36 percent from 3-point range.

He didn’t offer an excuses.

“I went through some things, but I was healthy enough to go out there and play,’’ said Middleton, who didn’t specify the injury he was dealing with in the playoffs. “Nobody is 100 percent at that time of the year. Everybody is banged up or sick.

“I really don’t care what percentage I was. All I know I was able to compete.’’

Fortunately for the Bucks, Middleton is model of fitness now. It’ll be imperative he remains physically healthy and, until Parker returns at least, exhibit a robust offensive game.

Suffice to say, Middleton is champing at the bit to showcase his skills again and play real games again.

“It’s been a long couple of weeks of practices, playing against the same guys over and over,’’ Middleton said. “I’m fresh; I’m healthy. I think we’re all ready.’’