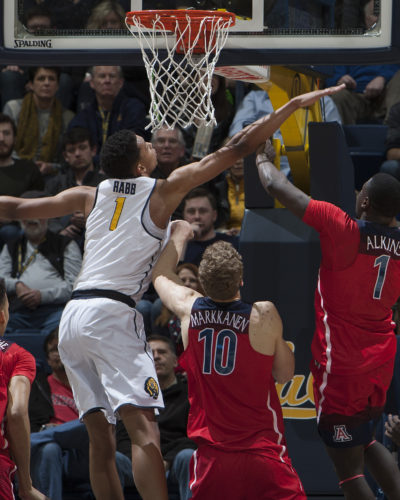 There were some observers who felt the Milwaukee Bucks would have seriously considered selecting Ivan Rabb if he had decided to remain in the 2016 NBA draft.

But Rabb, a talented all-around power forward, opted to return to the University of California for his second season and the Bucks, with the 10th overall, wound up choosing center-power forward Thon Maker.

Now, one year later, the Bucks could still end up with the 6-foot-10 Rabb. They have the 17th overall pick in the June 22 draft and their interest in him is reflected in the fact he’ll be working out for the team on Friday morning in St. Francis.

It will be the first of several pre-draft workouts for Rabb, whose next workout is Monday with the Orlando Magic.

“I’ve been preparing for this moment for a long time,’’ said Rabb, who insists he doesn’t have any regrets about returning to California for another season. “I’m looking forward to showing teams what I can do.’’

Which is a lot. Rabb is unequivocally one of the best all-around big guys in the draft. That’s vividly reflected in the 17 double-doubles for points and rebounds he recorded this season and the 29 double-doubles he’s registered in his two seasons with the Golden Bears, the second most in the last 20 years at the school.

Rabb, who said he’s patterned his game after Chris Bosh, LaMarcus Aldridge, Kevin Garnett and Tim Duncan, is projected to be drafted in the vicinity of where the Bucks are picking, according to an Eastern Conference scouting director.

“I see him going between 15 and 20,’’ the scouting director said. “He’s a good player and he’s a very good rebounder. A high-character guy, too.

“I think he would have been drafted higher last year, but this year’s draft is better and deeper.’’

While the Bucks are almost certain to have Rabb on their short list for their first-round pick, they’ll likely be giving serious consideration to tabbing Dillon Brooks with their second-round pick, No. 48 overall.

The 6-foot-7 Brooks is coming off a stellar junior season at Oregon, where he averaged a team-leading 16.1 points while shooting 49 percent from the field and 40 percent from beyond the arc.

Brooks raised more than a few eyebrows with a late-season, scoring surge. In a stretch of 16 games down the stretch, he scored 18 points or more in 13 of them. He had a 27-point outing against Arizona State and 25-point showings against Arizona and Oregon State.

Brooks earlier this week worked out for Indiana and Chicago.

“He doesn’t have a true position,’’ said an Eastern Conference scout, who envisions Brooks being a mid-to-late second-round pick, again in the neighborhood of where the Bucks are picking. “He played a lot of power forward at Oregon but he’ll have be more of a small forward in our league.

“But I like him. He plays hard; he competes and he makes big shots. He’s got a lot of good intangibles and that’s why I think he’s going to make someone’s roster next season.’’